In the Himalayan highlands, a small stretch of rocky plateau is at the centre of a military standoff, with two Asian behemoths breathing fire at one another as Bhutan, an involved bystander, sinks into the shadows.

The location – Doklam – is barely 89 square kilometres of land in dispute between Bhutan and China, with India playing protective mother hen to Bhutan. The current escalation is new, but the heart of the matter is not: Two countries are jockeying for neighbourhood control, fed by strategic concerns and the memory of the 1962 war, one in which China dealt India a crushing military blow. Bhutan is merely the stage where the second act of live theatre is unfolding.

The contested area is strategically located, nestled between Tibet's Chumbi Valley on the west and Sikkim, India, in the south. Through the pass into India one enters the Siliguri Corridor, otherwise known as Chicken's Neck, a narrow stretch of land which provides the only land access between India's Bengal state and its eight northeastern states where 45 million Indians live. Chicken's Neck gives India reason to worry.

China, of course, is a planning pro. Road building – and major engineering projects – are a key part of its strategic goal to reach far-flung border areas. Several decades ago it achieved a herculean task by building a railroad through Xinjiang province. The rails spliced through the Taklamakan Desert, a silk route which had the reputation: "Go in and you will never come out." China did, connecting the mainland to Urumqi and flooding the city with oilmen hungry to extract the province's abundant natural resources. Much, of course, to the chagrin of Xinjiang's autonomy-seeking populace.

The Doklam conflict was initiated by a similar – if less ambitious – road project, which could give China near-access to the pass that enters India's Sikkim region, east of which China also has land claims. India was able to respond quickly because of its long-established foothold in Bhutan. With troops in place and a military academy located in nearby Haa Valley, its foot soldiers rose to the occasion.

The backdrop to this current conflict is both political and emotional. India, while concerned over China's strategic moves, is also hankering for revenge. In the one-month 1962 war, almost 1,400 Indian soldiers were killed over China's 700. Prior to facing off then, the two had been on good terms: a common slogan of the time was "Hindi-Chini bhai-bhai" (India China Brothers Forever).

Yet those were early days for a young India, which had secured independence from the British in 1947, inheriting unclear boundaries and dated agreements like the 1890 agreement China is forcing upon Bhutan today.

In China, the Communist Party came to power in 1949, leading its forces into Tibet in 1959. When the Dalai Lama sought refuge in India, Mao Zedong could not have been pleased. He was also concerned (wrongly) about India's interest in Tibet. While asserting its military superiority in 1962, however, it lost the "Indo-China Brothers Forever" momentum. From this point on, its camaraderie with Pakistan also irked India.

The perception of betrayal partially fuels reactions in India today, with official statements reminding China that India is no longer a country with little means. Its decision to push troops into position did not appear to involve Bhutan.

This puts Bhutan in an uncomfortable place, with a limited role in current negotiations. Prior to this conflict, Bhutan had 24 border discussions with China. Now the discussions are between India and China, not Bhutan and China.

On its southern border, Bhutan has a 1949 "friendship" treaty with India, in which it ceded significant control over its defence and foreign affairs. India trains its military, builds roads and projects like the hydroelectric plant.

Many Bhutanese speak Hindi with ease, partly as a result of their love for Indian TV shows. But such ties come at a cost. Bhutan's economy is tourism dependent; it levies hefty foreigner tourism fees on luxury travellers but Indian visitors enjoy visa-free entry. As times change, though, some Bhutanese want to be less clearly aligned – they seek a more balanced relationship with India and China.

But two months into the standoff, with Indian and Chinese soldiers pelting each other with stones at the border and Chinese officials declaring that bonhomie is out of the question unless Indian soldiers withdraw, a change in the status quo appears unlikely. The mountain kingdom preaching happiness remains stuck between a rock and a hard place. 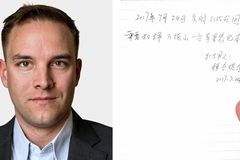