A bombshell. No, a mega-magnitude earthquake. The tectonic plates underlying Canada collided against each other. To this day, the aftershocks continue their eruptions.

Forty years ago, on June 25, 1969, Indian Affairs minister Jean Chrétien proudly presented his Statement of the Government of Canada on Indian Policy. Known since as "the white paper," it pursued Pierre Trudeau's concept of a "just society" by rescinding all of the Crown's policies and commitments made toward Indians since the 1763 Royal Proclamation.

Its logic was summarized in two sentences: "The policy rests upon the fundamental right of Indian people to full and equal participation in the cultural, social, economic and political life of Canada. To argue against this right is to argue for discrimination, isolation and separation."

For most Canadians, that seemed only fitting after a decade marked by immense struggles worldwide against segregation and for equality. But it also meant that Indians would lose their centuries-long unique status. Treaties would be scrapped. Indian lands, long owned collectively under the trusteeship of the Crown, would be privatized and distributed to Indians individually. The Indian Affairs bureaucracy would shut down. Indians, like other Canadians, would receive services from provincial governments and federal ministries serving the general population.

"The government hopes to have the bulk of the policy in effect within five years," was the forecast. After 40 years, none of it has occurred.

The white paper caused an explosion of outrage and existential anxiety. The reaction of Indians was forcibly expressed by Harold Cardinal, a Cree from Alberta who had studied sociology at Ottawa's St. Patrick's College and, just the year before, been elected, at 24, as president of the Alberta Indian Association.

"The history of Canada's Indians is a shameful chronicle of the white man's disinterest, his deliberate trampling of Indian rights and his repeated betrayal of our trust," he charged in his riposte, titled The Unjust Society: The Tragedy of Canada's Indians. "Once more the Indians of Canada are betrayed by a program which offers nothing better than cultural genocide."

For this voice expressing a new Indian generation, the "white man" had proved himself a liar, a cheat, a swindler, a racist, a colonizer, a tyrant, a brute who spoke with a forked tongue. The solemn promises and contractual obligations of the treaties were betrayed.

What he then articulated prophetically would become the countervision to the 1969 white paper. He expressed the main themes of a native renaissance that flowered across the country beginning in the 1960s, after the half a century of virtual silence since Pauline Johnson wrote. It would include such notable figures as Norval Morrisseau, Duke Redbird, Buffy Sainte-Marie, Maria Campbell, Tomson Highway, Alanis Obomsawin, Richard Wagamese, Eden Robinson, Joseph Boyden and innumerable others.

Then the Supreme Court of Canada, in judgments such as Calder (1973), Sioui (1990) and Delgamuukw (1997), would repudiate the Trudeau vision of a single standard of citizenship, and would assert the continuing validity of historic commitments made to Indians by the Crown.

Mr. Trudeau came to recognize the error of the white paper. His repudiation would be expressed by Section 35 of his 1982 Constitution Act: "The existing aboriginal and treaty rights of the aboriginal peoples of Canada are hereby recognized and affirmed. ... For greater certainty, 'treaty rights' includes rights that now exist by way of land claims agreements or may be so acquired."

History has left Canada as a jigsaw puzzle of fault lines running between regions and communities with varying commitments and many unfulfilled obligations. The task of defining and mending them has only just begun.

Some principles to guide current and future negotiations in fulfilment of Canada's obligations to Indians were spelled out by the court in Badger (1996):

"First, it must be remembered that a treaty represents an exchange of solemn promises between the Crown and the various Indian nations. It is an agreement whose nature is sacred. ... It is always assumed that the Crown intends to fulfill its promises. No appearance of 'sharp dealing' will be sanctioned."

And the court laid this obligation on the government: "Any ambiguities or doubtful expressions in the wording of the treaty or document must be resolved in favour of the Indians. A corollary to this principle is that any limitations which restrict the rights of Indians under treaties must be narrowly construed."

The racism of the past left Canada a legacy of multitudinous debts to Indians that must eventually be acquitted. At the same time, the court recognized that third parties - most Canadians - have also acquired rights over the centuries that must be respected. And the entire financial structure of the country must not be destroyed in the process of pursuing a justice long delayed.

Can the Canadian square and the aboriginal circle somehow be reconciled?

William Johnson is an author and a former president of Alliance Quebec. 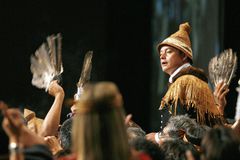