Thomas Juneau is an assistant professor at the University of Ottawa's Graduate School of Public and International Affairs.

Iran and the P5+1 – China, France, Russia, the United Kingdom and the United States, or the five permanent members of the UN Security Council, plus Germany – finally reached a deal on Tuesday resolving the long-standing dispute over Iran's nuclear ambitions. This raises questions for Canada, which has displayed a particularly aggressive stance toward Iran in recent years.

The Harper government's hostility toward Tehran has been based on the premise, frequently expressed by the Prime Minister and senior ministers, that Iran poses the greatest threat to international peace and security. The government has nuanced this assessment recently, labelling Iran a "significant" threat to international security, presumably reflecting growing concern about the Islamic State and Russia. Nevertheless, it remains that Canada has differentiated itself from its allies under the Conservatives, adopting a harder line against Iran.

As nuclear talks progressed over the past two years, Canada remained deeply skeptical of Iranian intentions and insisted that only tangible actions would prove Iran's commitment to restraining its nuclear program. Canada also systematically emphasized that human rights had not improved under President Hassan Rouhani and that Iran's support for terrorism across the Middle East continues unabated.

This aggressive policy towards Iran has been based on a flawed premise, has had a marginal impact, and has resulted in few measurable benefits.

The policy, first, has been built on a fundamentally unsound assumption, as Iran is not the greatest threat to international peace and security. Its economy has been strangulated by sanctions; its military is weak in conventional terms, and it is more diplomatically isolated than it has been since the 1980s. Its regional security policy has been mostly reactive.

More importantly, Iran poses only a marginal direct threat to Canadian interests, making such a hostile policy unjustified. To claim that the approach is based on principles, as the government does, is at best inconsistent and at worst hypocritical: Human rights in Saudi Arabia are worse than in Iran, and Canada seeks to deepen ties with Riyadh.

The Harper government's Iran policy, in any case, has had a limited impact. To the extent it has been noticed internationally, for example, it has merely brought an occasional measure of annoyance in Washington and a mixture of head-scratching and puzzlement in Tehran.

The policy has brought only limited benefits for Canada. It is true that Canada's rhetoric has been positively viewed by the Netanyahu government in Israel and in Arab capitals of the Persian Gulf. At the same time, one must admit that costs have been small: already limited bilateral trade, in particular, would have been lost anyways because of sanctions. Iran did not retaliate against Canadian interests.

Canada is now faced with three options. Ottawa could, first, continue its hostility. There is little to gain here: It would ensure that Canada remains locked out of a post-deal Iran. Iran's economic and diplomatic re-emergence will be slow and gradual, but it does offer attractive benefits in the long term.

Second, Ottawa could follow its U.S. and European allies. The deal does not represent a grand reconciliation, but merely – for now at least – a lowering of tension. This option would imply slowly but cautiously moderating our stance and keeping an open mind about future co-operative steps.

Alternatively, Canada could think farther ahead and recognize that Iran has the potential to establish itself as an important regional power. That potential is far from fulfilled today, but Canada could choose to position itself as an active partner in Iran's possible reintegration in the world economy and in regional security structures. This is unlikely to happen if the Conservatives are re-elected in October, but it could be an attractive option for the Liberals or the NDP.

From 2003 to 2014, Thomas Juneau was an analyst with Canada's Department of National Defence. He is the author of Squandered Opportunity: Neoclassical Realism and Iranian Foreign Policy (Stanford University Press, 2015). 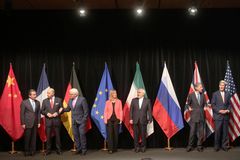