This week saw the resumption of negotiations that could reshape the Middle East. If they fail – and they might – at least serious and sustained diplomatic efforts will have been made to prevent Iran from getting a nuclear weapon.

Success or failure, the negotiations will have been worth it, and certainly worth robust rhetorical support from bystanders, such as Canada. Instead, Prime Minister Stephen Harper's government has lined up with the scornful skepticism of Israel's Benjamin Netanyahu, offering comments that have been largely dismissive and unhelpful.

No matter. The Harper government has so marginalized Canada (in a region where it seldom had much influence to begin with) and distanced itself from traditional Western allies that nobody notices or cares any more what it says.

Other Western countries wisely understood that the election of Iranian President Hassan Rouhani last June really did represent an opening worth pursuing. He campaigned for an "end of extremism," re-engaging with the world and seeking some kind of nuclear deal that would leave Iran with nuclear facilities, some enrichment of uranium, but not necessarily nuclear weapons.

His election was greeted by Mr. Netanyahu as a kind of ruse. Mr. Rouhani was a "wolf in sheep's clothing." Negotiations of the kind the United States proposed were a "historic mistake." Any deal with Iran, he insisted, must mean no enrichment of any kind – a position equivalent to saying there could be no deal whatsoever, because no Iranian government would ever accept that condition. Mr. Netanyahu's position was reflected in Ottawa, although the Canadian language was slightly milder.

When Canadian Foreign Minister John Baird says his government's position is widely applauded privately in the Middle East, he must be referring to Sunni Muslim states such as Saudi Arabia and Egypt, which dislike Iran's Shia regime.

Thus far, the Israelis and Canadians have been shown to be quite wrong. Along with China and Russia, the United States, France, Britain and Germany negotiated an interim agreement with Mr. Rouhani's government that would have been inconceivable before his election.

This week marked the beginning of at least six months of negotiations toward a final settlement. As the talks began, Iran's Supreme Leader Ayatollah Ali Khamenei declared that the talks "will not lead anywhere." But in the same breath, he authorized his country's government to return to the table. At the end of the day, what he will say about Iran's bottom line remains unknown.

Thus far, in return for the lifting of $7-billion of economic sanctions (a small share of the total sanctions), international inspectors have returned to Iran. Iran has agreed to eliminate its stockpile of 20-per-cent enriched uranium and to not build any more centrifuges.

Many U.S. senators are dismissive of what has been accomplished – they want even more sanctions. This would be an approach of supreme folly, convincing the Iranians that the Americans are negotiating in bad faith.

If Iran is not to have nuclear weapons, what are the alternatives to serious negotiations? A nuclear Iran could lead to weapons proliferation through what is already the world's most volatile region – to Turkey, to Saudi Arabia and maybe to Egypt. Israel, which is currently the region's only nuclear power, would be confronted with a number of nuclear-equipped rivals.

What would attacks on Iranian nuclear facilities bring? A setback of perhaps two or three years in Tehran's program and a further deepening of that country's resolve to go nuclear. Stiffer sanctions? How much more beyond the tough ones that were already in place?

Iran and the United States have had terrible bilateral relations for more than three decades. The U.S. is routinely called the Great Satan, the perpetrator of a coup that overthrew a democratically elected Iranian government in 1953, a country that supported Iraq in the Iran-Iraq war and whose president called Iran part of the "axis of evil."

Americans remember their diplomats being held hostage, Iranian assistance for terrorist groups in Lebanon and Tehran's lies about its nuclear program.

With that background, all bets are off on a long-term deal. But negotiations have achieved limited success thus far – they deserve strong support, not churlish asides from the diplomatic peanut gallery.

Opinion
Black-and-white views leave us blind on Iran
May 11, 2018

Opinion
Canada and the Middle East: a reality check
April 4, 2018 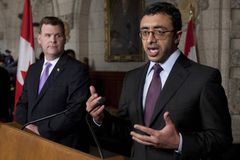 Opinion
Ottawa’s embrace of Twitter diplomacy will fail without greater openness
May 11, 2018