Michael Bell has served as Canada's ambassador to Jordan, to Egypt and to Israel.

The events of the past several days in Iraq have been traumatic. Reports are confused, and events may be over-dramatized, but the fall to extremists of parts of Mosul, Iraq's second-largest city, and Tikrit, the birthplace of Saddam Hussein, seems certain. The ideological and ethno-nationalist commitments of these militants, accompanied by massive desertions from the Iraqi armed forces, are stark indicators of the disaster of American neo-conservative intervention, so confidently asserted by the former Bush administration as a solution to Arab ills. If the lesson is learned, U.S. President Barack Obama will decline to lend air support to a bedraggled government in Baghdad, knowing the struggle is unwinnable.

The American invasion of Iraq revealed the ineptitude of leading from the gut, whether based on imperial interest or neo-conservative belief, and ignoring evidence-driven reality. Despite continuing investment in the Iraqi military, the current fragmentation of Iraqi society and the irreversibility of conflict once the ethnic spectre is fully awoken begs the question of whether there is any alternative to authoritarian rule. Indeed, Iraqi Prime Minister Nouri al-Maliki is no democrat, although it is difficult, so far at least, to compare his brutality to that of his predecessor. The Prime Minister presides over a fractured state whose boundaries were drawn by the colonial powers during the Paris Peace Conference of 1919. These borders ignored ethnic and discordant belief systems of which Iraq is a prime example.

The result was the emergence of brittle and artificial state entities (Iraq, Syria and Lebanon, in particular) where boundaries had little relationship to identity or community. These sovereign entities were overpowered by sub-state and supra-state loyalties, best illustrated by the Shia-Sunni divide stretching from Tehran to Beirut, where each viewed the other as heretical, and where relationships have long been based on dominance (Shiites most often oppressed), in search of a sustaining identity.

Although the shattering of the state system by popular uprisings in Syria, for example, demonstrated the will of peoples to free themselves from arbitrary rule, they lacked the ability to achieve or sustain what they rightly viewed as freedom, justice and pluralism. It is important to remember that the great majority in Iraq – the dispossessed and intelligentsia alike – welcomed what seemed to be an American presence that would ultimately guarantee their dignity, just as those in Syria anticipated their own efforts would result in the overthrow of the Assad dynasty. All ended in failure, as I believe the Afghan intervention will, no matter how supporters of that enterprise try to justify their involvement through worthy, albeit unsustainable reforms.

What can be done? The current chaos, while mutating, may continue into the foreseeable future with the outside world standing by unable to influence this Manichean struggle between absolutist values. Established states may become a series of homogeneous, medieval-like warring entities. Alternatively, autocrats may be able to reassert themselves, as in Egypt, replacing one regime with one more brutal still. A last, and sadly markedly less likely alternative, would be a gradual adoption of a rules-based system built on pluralism and justice by autocrats themselves as a tool to maintain their own legitimacy.

The accepted logic by reformers, both in the West and from the region, is that we remain committed to a progressive order promoting peace, freedom and prosperity, albeit conditioned by Middle Eastern norms. Although often unrecognized, efforts to promote shared values within what we deem less advanced societies can be labelled "cultural imperialism." This does not invalidate the role of the West and some progress can be made. However, rejectionist attitudes remain a hard core reality, reinforced by the region's long-standing authoritarian traditions, no matter how uncomfortable we may find them.

If there is any hope for far-reaching transformative change it is with Tunisia. Despite its own repressive heritage, it has a tradition of relative openness to the West, a secular society, a progressive social regime, a solid economy, and a seemingly progressive Islamist-based government. It accordingly merits considerable time and investment from outsiders – a focused, internationally co-ordinated approach might just pay off. This does not negate, for instance, the need to support strategically placed and relatively benign Jordan, but there will be no "new world order" in the Hashemite kingdom.

The challenge for policy-makers is to establish achievable goals, accepting the seemingly unending reality of Arab states beset with autocratic leaderships and riven societies. To articulate and channel political ambitions and create meaningful civil societies in this environment is no easy task. The continuing disaster in Iraq is an example par excellence.

Michael Bell is an Aurea Foundation Fellow at the Transatlantic Academy of the German Marshall Fund in Washington. 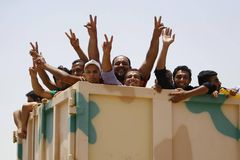