Here's an election-year riddle for you: When is a coughing fit not a coughing fit? Answer: When it happens to a candidate who is running to be the first female president of the United States.

Campaigning in Cleveland this weekend, Hillary Clinton experienced a bout of coughing during a speech and another one in front of reporters travelling aboard her plane. This brief physiological episode was gleefully picked up by the hard-right website Breitbart News (whose former boss now runs Donald Trump's campaign.) More troubling, NBC considered it newsworthy enough to tweet out a story under its NBC Politics feed: "Hillary Clinton struggles to fight back coughing attack."

Is a cough really such a big deal? As the Wall Street Journal noted in 2008, presidential candidates from John F. Kennedy to Barack Obama to the original Clinton, Bill, have lost their voices on the campaign trail. The difference is that for those campaigners, a hoarse voice was a sign of macho perseverance over adversity. For Ms. Clinton, dogged for the last month by lies about her health, the coughing will be used as a slur that she is physically unfit to be president.

Her opponents aren't stupid enough to say that in plain English, of course. Sexism is no longer delivered straight up on a platter, but arrives coyly draped in innuendo. Last month, Mr. Trump claimed that Ms. Clinton "lacks the mental and physical stamina to take on ISIS and all of the many adversaries we face." She is "low energy," he has said, and "probably napping."

You don't have to be Alan Turing to decode those statements and you don't have to be a hunting dog to hear the whistle. This woman, we are being told, is too weak to take on the world's thugs and thorny problems (even if she did it quite ably for years as secretary of state.)

"When Donald Trump says she doesn't have the stamina to lead, there is an underlying criticism that may resonate more because she's a woman candidate, and a woman candidate of a certain age," says Kelly Dittmar, assistant professor of political science at Rutgers University and a scholar with the Center for American Women and Politics. "We talk about her age more than about the men who run, even though Donald Trump is older." The question that is really being asked, Prof. Dittmar says, is whether a woman is "strong enough to be the leader of the country. The presidency has always had a particularly strong identity in masculinity. It's our most highly masculinized office."

If you listen to Mr. Trump's surrogates on right-wing news sites, Ms. Clinton is suffering brain damage (according to Sean Hannity), and "several signs of illnesses" according to Rudy Giuliani, who added helpfully that concerned citizens could "go online" and discover all the complex diagnoses for themselves.

Of course, no such diagnoses exist. What does exist are wackadoodle conspiracy theories that claim Ms. Clinton has dementia or brain damage (the result of her 2012 blood clot, which did happen), that she requires a minder who carries a tranquilizer pen, cannot climb stairs on her own, needs pillows to sit on a couch and lacks the strength to open a pickle jar. A video allegedly showing her having a seizure has been thoroughly debunked by the Associated Press reporter who was asking her questions at the time. "Where I saw evasiveness," Lisa Lerer of AP wrote about the June encounter in a cafe, "they see seizures."

What all of this conveniently ignores is that Ms. Clinton has been working the campaign trail for more than a year, and before that was a New York senator and the secretary of state – hardly jobs for an invalid.

"The idea that you're going to attack this lady on stamina is crazy," says journalist Rebecca Traister, who followed Ms. Clinton on the campaign trail for a New York Magazine story in May, and wrote the book Big Girls Don't Cry: The Election that Changed Everything for American Women about the 2008 race for the White House. Ms. Traister said those days on the trail were filled with multiple events every day and she never saw Ms. Clinton flag, "although I'd come back and hide under my bed for 48 hours because I was so tired."

One day, when our descendants are used to the presence of a woman in the White House, a cough will be just a cough. Unfortunately, that's not today. 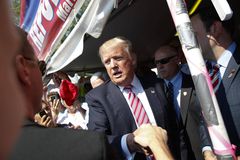