This week, the Harper government pushed through the Marketing Freedom for Grain Farmers Act to end the Canadian Wheat Board's monopoly on selling wheat and barley. It also eliminated tariffs on 70 imported products, to the delight of Canadian manufacturers. Both steps, the government argued, would help Canadians compete internationally. Said Agriculture Minister Gerry Ritz of the Wheat Board's demise: "This is what we have been waiting for, [for]decades."

From the other side of the government's mouth, during the same week, came affirmations of undying support for supply management for dairy and poultry producers, a system that mocks every principle for which this government is supposed to stand.

Parliament Hill is alive these days with lobbyists for the supply-managed farmers, the most powerful lobby group in Canada. They see potential threats to their cozy arrangements, and are mobilizing against them.

The threats are coming from possible trade agreements with the European Union and a group of Asian states.

Nine countries around the Pacific have formed the Trans-Pacific Partnership. They're determined to reach a ground-breaking free-trade deal, and have already conducted eight rounds of negotiations. The group includes the United States, Australia, New Zealand, a few countries in Southeast Asia and a couple in South America. The TPP could be the first step toward a much larger trade deal throughout the Pacific region. And any Asia-Pacific deal would be in Canada's interest to join.

After months of prevaricating, the Harper government announced two weeks ago that, yes, it was joining the TPP but would, of course, protect supply management in the negotiations. Except that other TPP countries don't agree with Ottawa's interpretation.

For them, no country can join by establishing preconditions, as Canada wants. Said U.S. Trade Representative Ron Kirk this week: "Potential new entrants must be prepared to address a range of U.S. priorities and issues, and meet the high standards sought by all TPP partners." Read: Canada and supply management.

Said New Zealand Trade Minister Tim Groser in a recent speech: "This is not business as usual." Subtext: Canada can't claim an exemption for supply management before or during the negotiations. Canada has to be all in, or Canada will be all out.

If Canada got an exemption for supply management, then Japan and South Korea would want one for their farmers. Other countries would then demand this or that break, and the TPP's considerable ambitions would be watered down.

The Harper government is obviously hoping that the U.S. (and other friendly countries such as Chile and Peru) will turn a blind eye to supply management and admit Canada, thereby brushing past more hard-line free-traders such as New Zealand and Australia.

The Harper government knows the Americans have agriculture subsides aplenty. No U.S. administration will sacrifice those. So the Obama administration will wink, nod and put pressure on other participants to let in Canada, regardless of the U.S. Trade Representative's hard-line stand.

Once in, Canadian negotiators will perform this country's well-worn act: Preach and seek free trade (see this week's announcements) while protecting supply-managed farmers with stratospheric tariffs and tiny import quotas.

The Harper government, like its predecessors, dances to the tune of the supply-managed farmers who have politically terrorized successive governments. In no other industry would a government allow tariffs that obviously make products more expensive for consumers and food processors. The worst-hit consumers, of course, are low-income Canadians, who spend a higher portion of their budget on food than wealthier Canadians. But do you ever hear a peep of protest about supply management from low-income Canadians' erstwhile best friends in the NDP? They dance to the farmers' music, too.

Supply-managed farmers operate within a largely closed market, at prices they and their friends set, using non-tariff barriers when necessary to protect their fief. That's why the system is a racket.

That's why other countries hate it. That's why Canada has to pull out every diplomatic stop – without any guarantee of success – to gain admission to what might be the most important trade negotiations ever in the world's fastest-growing region. 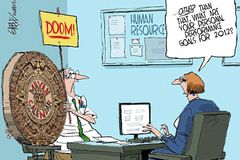 Opinion
Republicans want anyone but the pragmatist
May 8, 2018

Opinion
Remember the Reformers? They're still here
May 8, 2018