Ken McGoogan's books include How the Scots Invented Canada, Celtic Lightning, and 50 Canadians Who Changed the World. In September, he will publish Dead Reckoning.

Read also: Brexit's ending is yet to be written

Now is the time for the Canadian government to extend an invitation. Would the Scots consider becoming a province of Canada? I know, I know. Some Scottish nationalists will throw their hands in the air – as will some Canadians. Please, hear me out.

With a population of 5.3 million, Scotland would become Canada's third largest province, after Ontario (13.9 million) and Quebec (8.3 million). Our country's current population is 36.5 million. With Scotland, in a country of 41.8 million, the new province would represent 12.6 per cent of the population, as compared with 8 per cent of the 65 million people in the U.K. And it gets better. Add the 4.7 million Canadians who claim Scottish heritage and you've got a cornerstone population of 10 million – nearly 25 per cent of the country's total. Isn't that what they call a power block?

Scotland is not contiguous with the rest of Canada. But given current communications technologies and the speed of air travel, distance has become irrelevant. Besides, Scotland is nearer to Newfoundland (3,355 kilometres) than Hawaii is to California (3,977 km). Glasgow is nearer to Halifax (4,250 km) than Halifax is to Vancouver (4,443 km). And Edinburgh is nearer to St. John's (3,450 km) than to Athens (3,825 km).

No, Scotland would not become fully independent. But even as a typical Canadian province, it would have more powers than it does now. Provincial legislatures have jurisdiction over their internal constitutions and direct taxation for provincial purposes, including for municipalities, school boards, hospitals, property and civil rights, administration of civil and criminal justice, and the list goes on. Of course, things get complicated, so let's cut to the chase. Would Scotland control its oil resources? The Constitution of Canada places natural resources under the jurisdiction of the provinces. So, yes. The answer is an emphatic yes.

Obviously, Scotland would not be a typical province. It would be unlike nine of the current ten. But consider Quebec. In 2006, the Government of Canada passed a motion recognizing "that the Québécois form a nation within a united Canada." Quebec has its own ministry of international relations, whose mission is to "promote and defend Quebec's interests internationally." Like Quebec, Scotland would be distinct, but differently. And Canadians know how to accommodate difference.

True, Quebec has refused to sign the Constitution Act of 1982. But constitutionally, Canada has muddled on without that signature for 35 years … and looks good to go for another 35. Does anybody imagine that, without the overwhelming support of the provinces, the federal government could unilaterally make a change on the scale of withdrawing from the European Union? Be serious.

But let's think about the EU. What if, after Brexit, Scotland applied to rejoin, not as a nation of 5.3 million, but as part of a country of 41.8 million. Obviously, it would have more clout. For Canadians, Scotland would establish a foothold in multicultural Europe. So, while the Tories in Britain and the Republicans in the United States set about creating a neo-liberal Anglosphere – anti-egalitarian, avowedly Christian, pro-Big Business, pro-military – Scotland becomes part of Canada and helps lead the way to a more progressive world. Here comes Ireland, north and south. Here comes Wales. It's a Celtic wave, and yes, it's bringing cheaper whisky.

Opinion
Brexit’s ending is yet to be written
April 1, 2017
Opinion
Why Brexit is unlikely to deliver what supporters believed they voted for
March 30, 2017 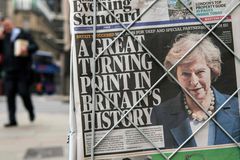 Opinion
For Ireland, Brexit is not a choice between the U.K. or EU
March 17, 2017
Follow us on Twitter @globedebate Opens in a new window
Report an error Editorial code of conduct
Due to technical reasons, we have temporarily removed commenting from our articles. We hope to have this fixed soon. Thank you for your patience. If you are looking to give feedback on our new site, please send it along to feedback@globeandmail.com. If you want to write a letter to the editor, please forward to letters@globeandmail.com.
Comments