Welcome to Conservative heaven – if you're a Conservative. Starting this week in Parliament, the Conservatives have the entire playing field to themselves.

They have majorities in the House of Commons and the Senate. And with those majorities, they can do pretty much what they want.

In the early going, what Conservatives want is to do things they've been hungering to accomplish for years. These include additional "tough on crime" bills, stripping public money from political parties and finally abolishing the long-gun registry. They also get to appoint two new judges to the Supreme Court, shape budget policy with a leaner federal government, and keep cutting taxes.

The Harper Conservatives scratched at these itches during minority Parliaments. But pesky opposition parties kept getting in the way. Now they can't stop the Conservatives. These itches speak to what the old Reform Party wanted to accomplish and, as such, illustrate the extent to which the Conservative Party is the national iteration of Reform, to which has been added a little support in Quebec and much more in multicultural Canada.

Not only do the Conservatives boast majorities in the Commons and Senate, but they face three opposition parties with temporary leaders. These leaders will fuss and complain, of course, but they'll eventually be replaced. None can put a long-term stamp on their parties.

The Conservatives are better at raising money. Eliminate public subsidies for parties, and the Conservatives' advantage increases. They will then enjoy the honey pots of government advertising that they used (abused?) so shamelessly in promoting their policies (remember those Economic Action Plan ads?) and their own honey pots from so many contributors to the party. We've seen what this dual financial advantage has meant before, and now that advantage will be magnified.

During the minority Conservative governments, pre- and post-recession, the size of government grew sharply. Like so many so-called conservative governments, they preached one thing – smaller government and balanced budgets – but delivered the reverse. The number of civil servants (and military, especially at headquarters) soared, transfers to provinces leaped, and government spending went up. During the recession of 2008-2009, the federal deficit exploded.

The question now is whether this crowd of big spenders can turn into a group of penny-pinchers, since that's what they'll need to become to meet the government's deficit-elimination target. But that target could be waved away on the grounds that the economy has weakened. Economic forecasts are gloomier than when the pre-election budget was unveiled. Prime Minister Stephen Harper is already talking about "flexibility," which could be a euphemism for punting the deficit-elimination target. His few comments on trimming government spending have suggested modest changes.

Put another way, nothing in the Conservative election platform and nothing that's been said since the majority victory suggest a serious overhaul of government. This is no Thatcherite, Tea Party or Reaganite crowd, although admirers of those approaches are part of the Conservative coalition. Instead, they've been more typically Conservative, delivering rhetoric about balanced budgets, lower taxes and smaller government, while delivering only lower taxes.

None of the rostrums of the far right in North America finds resonance with the Harper Conservatives: a flat income tax, private medicine of the kind Mr. Harper once preferred, privatizations of public services, sharply smaller government.

Maybe they're watching the travails of Toronto Mayor Rob Ford, a fast-fading conservative hero who promised all sorts of cuts and now finds he can't do much of what he promised. Or maybe they've watched Alberta's Conservatives, who've built the largest public service in Canada and who just kayoed the most right-wing candidates in their leadership campaign.

Maybe, in other words, whatever right-wing instincts the federal Conservatives have – and such instincts do exist – crash against the reality that most Canadians don't share those instincts. If the Conservatives did want to veer sharply right, now would be the time, given their majorities. Chances are, they won't. 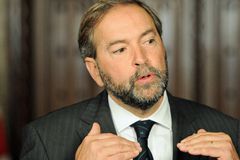