Frank Ching is a Hong-Kong based journalist.

Prime Minister Shinzo Abe failed to grasp the nettle when he delivered a much-touted address on the 70th anniversary of Japan's surrender at the end of the Second World War. As Mr. Abe pointed out, more than 80 per cent of today's Japanese were born after the war and, as time goes on, it will be 100 per cent. It is indeed time to move on.

However, ideally, moving on should come after a sense of closure. Unfortunately, Mr. Abe's speech does not succeed in providing this. Instead, in some ways, it reopens old arguments, implying that Japan was not really responsible for its role in the conflict.

In trying to explain why Japan did what it did in the 1930s and 1940s, Mr. Abe described the impact on Japan of the Great Depression and said the Japanese economy suffered a major blow as a result of economic blocks launched by Western countries and their colonies. In this respect, his speech is reminiscent of the narrative provided by the Yushukan War Memorial Museum adjacent to the Yasukuni Shrine, which seeks to justify Japan's role in the war.

Added to this is the failure to tackle head-on the "comfort women" issue, which has become a stain on Japan's reputation around the world and a huge obstacle to repairing relations with South Korea, whose President, Park Geun-hye, has called Mr. Abe's speech "wanting."

China, too, is clearly dissatisfied, with its state media calling the speech "insincere." Mr. Abe seemed to attempt to play down China. In expressing "deep remorse and heartfelt apology," he listed "Southeast Asian countries, such as Indonesia and the Philippines, and Taiwan, the Republic of Korea and China, among others," putting China last, even though China suffered more casualties than any other country as a result of Japanese aggression.

However, the Abe statement was very much in line with that issued in 2005 by Junichiro Koizumi, then prime minister, to mark the 60th anniversary of the war's end. Mr. Koizumi, like Mr. Abe, belonged to the conservative Liberal Democratic Party and, during his five years in office, visited the controversial Yasukuni Shrine each year.

In fact, there is little point for Japanese leaders to issue statements of remorse every 10 years, especially since, before long, all the people of Japan would have been born after the war. Those people are not responsible for the war and should not be expected to apologize for it.

China's official position traditionally has been that the Japanese people, too, were victims of the war, with only a "small minority of militarists" being responsible. Thus, there is unlikely to be any insistence on new apologies from people who weren't even born during the war.

However, this doesn't mean that the Japanese should not confront their history. In fact, being able to face history is crucial to Japan's ability to cope with the present and the future, but this is very different from issuing ever more apologies. In fact, Mr. Abe recognizes this and asserted in his speech: "We Japanese, across generations, must squarely face the history of the past. We have the responsibility to inherit the past, in all humbleness, and pass it on to the future."

The recent decision by Mitsubishi Materials to apologize to U.S. prisoners of war and to pay compensation to thousands of Chinese who were forced to labour for the Japanese company during the war is definitely a step in the right direction.

With 70 years having elapsed, the time has come for all sides concerned to move into the 21st century rather than allow themselves to be trapped in the 1930s and 1940s in a time warp. Japan must face the past and move on. But former victims, too, must move on. Such countries, particularly China, must not use history to ratchet up pressure on Japan to gain advantage on current issues.

Hong Kong is an example of not forgetting the past while moving into the future. The former British colony was invaded and occupied by Japan for three years and eight months. Today, however, Hong Kong's people are not hostile to Japan. On the contrary, the tiny region is the world's largest importer of Japanese food and half a million of its seven million people visit Japan every year. 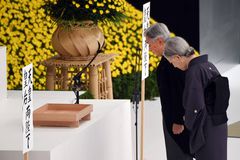