Alberta's woes get headlines and rightly so, since the woes are serious and new. But Newfoundland's woes are more serious, structural and less easily resolved.

Worse for Newfoundland, its population is the oldest in Canada, four and a half years older than the national average. Alberta's is the youngest. Partly as a result of this older population – and partly because services to scattered outports are expensive – Newfoundland spends more per capita on health care than any province. Alberta is second.

Alberta's pain augments Newfoundland's. When boom times defined Alberta, many Newfoundlanders flocked there. Fort McMurray, capital of the bitumen industry, was full of Newfoundlanders. Some worked long stretches, then returned home for a few weeks. Others sent remittances back to families. Some Alberta jobs have evaporated, sending Newfoundlanders home unemployed; remittances have diminished.

Newfoundland's budget in April, 2015, forecast a $1-billion deficit. Half a year later, it had almost doubled, courtesy of the collapse in oil prices. In a whoosh, revenues fell by $888-million.

In the good times, when oil prices were high, Newfoundland's government paid down some debt and spent handsomely. Per-capita program expenses were about 30 per cent greater than the average of all other provinces over the past four years. Cutting them will be difficult.

An example (not restricted to Newfoundland): Given the province's stagnant population, and its age profile, the number of schools has decreased. But the average cost per student keeps rising. Demographics would dictate more spending on health, less on education. Tell that to the teachers' unions.

So, what to do, since taxes are high by national standards (unlike Alberta's)? Premier Dwight Ball's new Liberal government isn't mincing words. It has a launched a provincewide consultation about how to extricate Newfoundland from this problem. Its discussion paper begins, "Without action, Newfoundland and Labrador will face mounting debt, increasing interest and borrowing costs, a credit-rating downgrade and restricted ability to support key government programming."

Whether this focusing attempt works is rather doubtful. When faced with difficult choices, people usually look for bogeymen, claim things aren't that bad, believe the government is hiding something, cry "tax the rich" (would that there were many in Newfoundland), or seek refuge in everything but hard realities.

New Brunswick went through a similar public exercise, since it, too, is flat on its fiscal back.

Whether Newfoundlanders will confront their own dire circumstances with a great dose of reality remains to be seen. But Mr. Ball's government laid down a marker in this week's Speech from the Throne, declaring: "Addressing the serious fiscal reality is my government's top priority." To make big numbers comprehensible, the speech explained that "if we do nothing, it would be like borrowing over $7-million a day, every day. That is close to $300,000 an hour – essentially a new home mortgage every hour of every day. Think of it as maxing out your $5,000 credit card limit every minute of the day."

Whether such graphic examples will bring home the seriousness of the situation will become clear after the coming provincial budget.

What Newfoundland is not doing, unlike Alberta, is asking for special help from the federal government, even though its fiscal situation is worse. Perhaps that's because Newfoundland will again receive equalization payments (whereas Alberta has not), so asking for more might seem a bit much.

What has happened to Newfoundland is sad, given its history as a have-not province. High oil prices gave it a sniff of prosperity, particularly evident in the Avalon Peninsula, such that it didn't receive equalization. Unless and until oil prices recover, those days are gone. 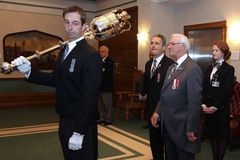 Governing Liberals in Newfoundland musing about raising HST: Tory leader
February 19, 2016
Newfoundland and Labrador's auditor general dismisses talk of bankruptcy
February 18, 2016
Follow us on Twitter @globedebate Opens in a new window
Report an error Editorial code of conduct
Due to technical reasons, we have temporarily removed commenting from our articles. We hope to have this fixed soon. Thank you for your patience. If you are looking to give feedback on our new site, please send it along to feedback@globeandmail.com. If you want to write a letter to the editor, please forward to letters@globeandmail.com.
Comments