The old Liberal gatekeepers are going to get their paws on him and press him into conforming, into becoming a conventional politician. If he listens to them, he'll be doomed. Sort of like Michael Ignatieff, who was thought to be an innovative thinker but was quickly enshrouded in the party's grey mists. He had no gravitational pull.

Mr. Trudeau, who enters the Liberal leadership race today, is alleged to have a problem with weightlessness himself. But his celebrity is such – when's the last time you've seen so much media frenzy over a prospective leadership candidate? – that he can make a mark. To do so, he must show the independence of mind of his father, who exhibited an admirable disdain for knee-jerk thinking.

At 40, Justin Trudeau isn't terribly young, but he has the aura of youth. As such, and given the other marketing advantages he possesses, he has the potential – slim but not out of the question – to lead the way for generational change in the exercise of political power in the country. The clock is ticking on the baby boom legions. They've run the show too long. Those behind them have watched in despair. They don't vote. For the most part, they've stayed on the sidelines.

But awakenings occur. The country's last big wave was encapsulated in the phrase "the West wants in." With time, it happened, inspiring the conservative renaissance we see today. A next big wave, though not so consequential, could come in the form of the younger generation's wanting in and getting in. They need a tribune. Who better to fill that role than the son of the leader who triggered an avalanche of youth activism decades ago?

Today, the leaders of our major federal parties are all over 50. While they're seasoned and talented, they lack, for obvious reasons, a close rapport with the coming cohorts.

There's little sense of idealism. One recalls the appeals to public service from the Kennedys. The thought of it sounds so out of place today.

Idealism is the currency of the young and, if Justin Trudeau is to succeed and the Liberal Party to have new life, a new sense of it is essential. His appeal should be one of broad scope. It should be nothing less than an appeal to "change the system."

The young are so turned off by how Ottawa operates that only a sweeping reform will suffice. Pierre Trudeau's vision for stirring new interest in politics was "the just society." Justin Trudeau's should be "the new democracy" or something of that sort. It's an appeal that cuts across party lines, regional lines and age barriers.

The opposition parties have railed about abuse of power, about how our democracy has deteriorated into near dictatorship, but have done so without offering much in the way of an alternative. Their proposed remedies have only amounted to tinkering at the edges. And so, in the last election campaign, when the Liberals went hard against the government for being found in contempt of Parliament, they got little traction. No one believed, especially given their own past record, they would be much different.

We'll begin to see today whether Justin Trudeau is much different. The party with the most clout among the youth of the country at this point is not his, but the NDP. It elected many student-age MPs from Quebec in the last election and has promising young performers such as Niki Ashton, the Manitoba MP who was a leadership candidate.

Mr. Trudeau's star power could quickly change the dynamic. But the pressures on him to not take risks, to play politics as usual, will be intense. But his handlers should know, particularly after the experience with Mr. Ignatieff, that old grey Liberalism doesn't work any more. They should know that the party requires a new idealism, which requires big thinking, which requires that Justin Trudeau go hard, like his father, against conventional wisdom.

Opinion
Justin Trudeau, a white knight in bleak armour
May 9, 2018

Is Justin Trudeau really taken seriously by his own party?
May 3, 2018 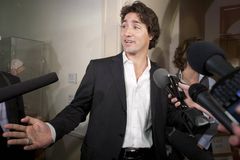