In October, 2009, Canada's Governor-General, Michaëlle Jean, said in a speech in Paris, "I, a francophone from the Americas, born in Haiti, who carries in her the history of the slave trade and the emancipation of blacks, at once Québécoise and Canadian, and today before you, Canada's head of state, proudly represent the promises and possibilities of that ideal of society." This seemingly innocuous statement, which it might be thought would have made Canadians proud that their country could be so open, free and ready to accept and respect able persons regardless of sex, colour, creed or origins, instead led to heated controversy. The issue was Ms. Jean's claim that she was Canada's "head of state." Prime Minister Stephen Harper joined the fray, as did the Monarchist League of Canada, both stating categorically that Queen Elizabeth II is Canada's head of state, and that the governor-general serves as the Queen's representative in Canada.

This, it could be argued, was a tempest in a teapot and simply a matter of words, not substance, and that, regardless of the name given to the office of governor-general, the functions and job remain the same. But the role of the governor-general, including the question of who is Canada's head of state, needs to be reconsidered, not least because, with continuing minority parliaments, the governor-general faces the possibility of having to exercise the reserve powers of the Crown and reject the advice of the prime minister.

ALL THE POWER OF THE SOVEREIGN

The British monarch appoints the governor-general, though this is done on the recommendation of the prime minister of Canada. The monarch also can appoint additional senators under sections 26 to 28 of the Constitution Act, 1867, though this power has been used only once, in 1990. Apart from these two minor exceptions, which continue to exist because of an inability to agree on reform and historical accident, respectively, since 1947 the governor-general has exercised all the powers of the sovereign in Canada.

It is not surprising that the difficulties over terminology arose during an official visit in a foreign country. How is the Governor-General to describe herself to a foreign audience that knows little about Canada? Should she say that she is Canada's Governor-General and leave it at that? The term "governor-general" is not a common one among the nations of the world outside the Commonwealth, and the significance of the position, unlike a "head of state," is not at all obvious. Would it have made things clearer if the Governor-General had explained that Queen Elizabeth II is Canada's head of state, and that the Governor-General is the Queen's representative in Canada? This would have left the unfortunate impression that Canada is not self-governing, and is subservient to the head of state of a foreign country. These convolutions confuse more than they clarify. No wonder that successive Canadian governors-general have described themselves to foreign audiences as Canada's head of state.

Though the vast majority of the governor-general's work is routine and non-contentious, from time to time occasions arise when a governor-general must exercise independent judgment. In 1873, Sir John A. Macdonald, the prime minister, fearing a non-confidence vote over the Pacific Scandal, asked the governor-general, Lord Dufferin, to prorogue Parliament. Dufferin consulted widely. He granted Macdonald a prorogation, but only for 10 weeks. When the House of Commons met that October, Macdonald, still facing a vote of confidence and losing support, resigned and Alexander Mackenzie took over as prime minister.

In 1926, prime minister Mackenzie King requested a dissolution of Parliament while he was facing imminent defeat on a vote of confidence in the House. The governor-general, Lord Byng, refused King's request, whereupon King promptly resigned. Lord Byng was forced to ask the leader of the opposition, Arthur Meighen, to form a government. Mackenzie King succeeded in making Lord Byng's behaviour, not his own, the issue in the subsequent general election, which King won.

Following the general election of June, 2004, prime minister Paul Martin's minority government managed to survive by placating at least one of the opposition parties until its defeat in November, 2006. If he had lost a vote of confidence within six months after the House met, governor-general Adrienne Clarkson would likely have refused a request from Mr. Martin for an election and invited the opposition leader, Stephen Harper, to become prime minister, if Mr. Harper could have provided evidence that he would enjoy the confidence of the House. Ms. Clarkson consulted widely and carefully in preparing for this possibility.

In December, 2008, Prime Minister Harper requested a prorogation when he faced imminent defeat on a vote of confidence. His request was granted by Governor-General Michaëlle Jean, even though the three opposition parties had agreed in writing to support a coalition government of the Liberals and NDP. She had the power and right to refuse the Prime Minister's request, but chose not to.

In her memoirs, Adrienne Clarkson speaks of an "unspoken rivalry … between the Prime Minister's Office and Rideau Hall." She is not the only governor-general to experience this rivalry. Jeanne Sauvé, governor-general from 1984 to 1990, found herself in media disfavour when she closed the Rideau Hall grounds to the public, even though they were closed for security and safety reasons on the advice of the RCMP and the National Capital Commission. Subsequently Ms. Sauvé asked the government many times to allow the grounds to be reopened to public access, but permission was delayed until her successor, Ray Hnatyshyn, had been appointed. Ms. Clarkson was criticized for lavish expenditures, in particular on state visits abroad, even though these trips were commissioned by, and paid for out of the budget of the Department of Foreign Affairs, and even though each took several years to plan, and the planning was done with the full knowledge and support of the government, including the Prime Minister's Office. Later, Ms. Clarkson refused the request of prime-minister-designate Paul Martin to break with tradition and protocol and have his swearing-in ceremony in the Parliament Buildings rather than Rideau Hall, where it had been held since 1867.

Prime Ministers seem to want to minimize the importance and prestige of the governor-general. The imperial prime minister tries to dominate the constitutional monarch. In December, 2009, Prime Minister Harper simply telephoned Governor-General Michaëlle Jean to request a prorogation, rather than appearing in person at Rideau Hall as is the custom. Ms. Jean was quite entitled to tell Mr. Harper that, if he wanted an unexpected (and what proved to be a contentious) prorogation, he should come to Rideau Hall and request it in person. Even the Monarchist League made no comment on this prime ministerial disrespect of the office of the Queen's representative in Canada.

If the governor-general were designated Canada's head of state, Queen Elizabeth would still be the Queen of Canada. Nothing in law or the Constitution would change. The change would simply reorient non-legal and non-constitutional titles to make it clear that the governor-general serves Canada and Canadians in his or her own right as Canada's head of state. This might encourage Canadians to take the position of governor-general more seriously. It might even lead them to wonder why the choice of a governor-general who might well at some time have to reject the advice of a prime minister over an important issue remains solely in the hands of the prime minister, an interested party. There are better ways to choose our head of state. 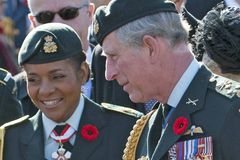 Opinion
An aboriginal G-G would bring glorious closure to painful history
April 7, 2010
Follow us on Twitter @globedebate Opens in a new window
Report an error
Due to technical reasons, we have temporarily removed commenting from our articles. We hope to have this fixed soon. Thank you for your patience. If you are looking to give feedback on our new site, please send it along to feedback@globeandmail.com. If you want to write a letter to the editor, please forward to letters@globeandmail.com.
Comments