At the start of the year, Denis Shapovalov had a bunch of things on his mind.

After winning the Wimbledon Boys' title the previous summer, he'd turned professional. Then he injured himself and was beginning to wonder if that had been a good idea.

He had trouble adjusting to the itinerant life of a tennis pro and was often homesick. When he did play, his results were promising but not stunning. He entered the year ranked 250th in the world.

The 17-year-old set a reachable goal for the season: crack 150. As soon as he set it, he began hedging.

"That would be ideal, but if I don't, I won't be too concerned," Shapovalov said in January.

What he really wanted to make sure of, he said, was that he was the sort of player who wouldn't embarrass himself against guys in the top 100. Maybe the top 50.

Modest ambition is something new for Canadian tennis, in the midst of its golden age. It has allowed Shapovalov to underpromise and then overdeliver.

On Wednesday evening, he beat Jo-Wilfried Tsonga at Arthur Ashe in the U.S. Open.

The Canadian didn't just defeat the tournament's eighth seed. He ran him ragged. At points in the match, the Frenchman looked like a man playing Twister without the benefit of a mat. Shapovalov turned the veteran inside out.

Though a notch less inspiring, it was more impressive than Shapovalov's victory over Rafael Nadal in Montreal three weeks ago. That was a war of attrition in a secondary venue. Having much less to gain from the encounter, the Spaniard eventually conceded the field.

Wednesday was total domination. Shapovalov got the heel of his hand on top of one of the world's best, most experienced players on the main court of a grand slam and pressed down until his opponent popped.

Shapovalov wanted to look like he belonged with guys in the top 100. How about the top 10? Or five? Right now, there's no one in tennis with whom he would look out of his league.

Afterward, Shapovalov delivered the same speech he would have given if he'd lost.

"I grew up watching Roger and Rafa play on Arthur Ashe [in the] night match. To have a chance to play here tonight, it's a dream come true. So I really want to thank the USTA for setting that up."

If this same result had come seven years ago, Canada would currently be in the midst of a full-on "OUR TIME IS NOW!" tennis meltdown. Instead, it's more of a happy fist pump (not above the shoulder) and a give-us-a-call-when-things-get-serious wave.

That's to Shapovalov's enormous advantage, and he has two people to thank for it: Milos Raonic and Eugenie Bouchard.

It's both unfair and unavoidable to compare 18-year-old Shapovalov in this moment to the best tennis players Canada has ever produced.

At 18, Raonic had barely begun. He was still playing in Futures tournaments, the lowest rung of pro tennis. He didn't win a match at a major or beat a top-10 player until he was 20.

Bouchard burned bright early – and the women's game is kinder to young players – but even she had to reach 19 before she beat a truly top competitor.

Over the past four seasons, those two brought us to a place where it no longer seems weird to see a maple leaf on the screen when you watch a match during the second week of a grand slam. After a while, we got used to it. Perhaps a little too used to it.

Five years ago, if Raonic had made the quarter-finals at Wimbledon, it would have been over-the-fold news. He did it this year, and the reaction was an eye roll and a "How's he going to hurt himself this time?"

Good enough is no longer good enough when it comes to that pair. That's not their fault, nor is it ours. We all led ourselves to believe there was more in store than a bunch of very respectable showings. There may yet be. But until there are, no one will get truly excited about Raonic or Bouchard again.

They cut the path, which is thankless work. So was the equally important job of pre-managing expectations for everyone else who walks it. Shapovalov is the first to get the benefit.

There are two versions of his next few days.

Shapovalov's opponent in Friday's third round is England's Kyle Edmund. The Canadian has already beaten him this year. Beyond that, Shapovalov's half of the bracket is as open as a New Brunswick four-laner. Only one person in it, the mercurial Marin Cilic, has made the final of a grand slam.

So the runway is clear. OUR TIME IS NOW!

This is Shapovalov's second major. He had to qualify to make the main draw. He's played a lot of high-anxiety tennis in the last little while and already massively over-performed. Just getting through his first full professional season with his confidence intact was the cake. Everything he does now is icing on top of icing.

Everybody knows they should take door No. 2, but it's hard to avoid the irrational excitement of door No. 1. Having seen what that did to Raonic/Bouchard (and in particular Bouchard) makes it a lot easier for Canada to go easy on Shapovalov.

He's just a kid. Plainly, an enormously talented kid. Maybe one who'll go on to surpass his older peers. But probably not this week. Almost certainly not.

We'll wait and see. This time around, knowing what we know now, there's no need to get ahead of ourselves. 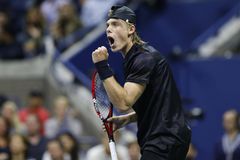 How Denis Shapovalov vaulted over his idol and carved a spot in Canadian sports history
August 11, 2017 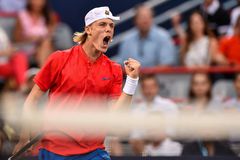