To help put the proposed Keystone XL pipeline's carbon footprint into perspective, consider some figures. The numbers might seem mind-numbing but they are essential to understanding the stakes involved in building what is perhaps the most cursed cross-border pipeline in history.

In the United States, annual carbon emissions have come down by an astonishing 720 million tonnes since 2007, partly because of slower economic growth, but mainly because of the of the shift from coal to natural gas in electricity production.

It's clear where the priorities should lie in fighting climate change. But since the U.S. State Department's release last week of its final environmental impact statement on Keystone, opponents have seized on one figure in particular in an otherwise balanced report that any reasonable person would conclude minimized Keystone's rogue status.

The Natural Resources Defense Council used the upper limit of the State Department's projection of incremental greenhouse gas emissions from Keystone. That figure – about 27 million tonnes of carbon dioxide equivalent – is 21 times the lower limit suggested in the report – a range so wide as to constitute a rather large grain of salt.

What's more, the 27-million-tonne figure is based on a comparison of oils sands crude with the cleanest sources of heavy oil, of which there are fewer and fewer. As an arm of the European Commission's Joint Research Centre recently noted, "technological improvements caused the greenhouse gas emissions intensity of oil sands production to decrease by about 25 per cent since 1990 whereas that of heavy oil increased by 25 per cent."

The arrow is moving in Canada's favour – not as fast as most of us would like, but in the right direction.

Yet, how did anti-Keystone elements react to the State Department's overarching conclusion that denying a permit to the pipeline's builders "is unlikely to significantly impact the rate of extraction in the oil sands or continued demand for heavy crude at [U.S.] refineries?"

Dan Weiss of the Center for American Progress likened the State Department's finding to "giving up on the interdiction of cocaine traffic into our country, because the drugs are going to get in anyway."

Jeffrey Sachs, of the Columbia University Earth Institute, said officials simply asked the wrong questions and Keystone should be stopped to ensure "the future survival and well-being of humanity, an idea admittedly of little apparent interest in Washington or Ottawa, centres of greed, cynicism and shortsightedness."

Such hyperbole won't impress Barack Obama. As New Yorker editor David Remnick notes in a blog post accompanying his recent 17,000-word opus on Mr. Obama's second term, the even-keeled U.S. President has a remarkable "capacity to argue both sides of a question."

When it comes to climate change, nothing comes close to mattering more than getting China and India off coal. Mr. Obama told Mr. Remnick he gets "into arguments with environmentalists" who oppose carbon capture or the switch to natural gas because such measures caution the continued use of fossil fuels.

"The Chinese and the Indians are going to build some coal plants, and even if we don't build another coal plant in this country, there are going to be a lot of coal plants around the world that are built," the President said. "And we have a huge investment in trying to figure out how to help them do it more cleanly."

Mr. Obama won't be moved either by the European climate commissioner's recent contention that stopping Keystone would be "an extremely strong signal." Europe has no lessons to give on reducing emissions. Its climate policies have been an utter failure. Its use of coal is rising.

Still, the President wants to show he's serious about climate change. Keystone could become collateral damage, since there is no chance of him getting climate legislation through Congress, while his administration's plans to regulate coal plants will likely be tied up in the courts for years.

Keystone is an infinitesimal part of the global emissions equation. But perspective is sometimes the first casualty of politics.

Opinion
Keystone a green light? Not so fast
February 5, 2014 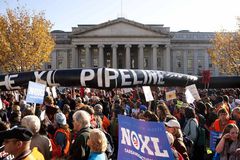