On May 1, 2007, Gary Merasty, then the Liberal MP for Desnethé-Missinippi-Churchill River, stood in the House of Commons to move that the government of Canada apologize to aboriginal peoples for the decades of mistreatment their children had experienced. On June 11, 2008, Prime Minister Stephen Harper followed suit by issuing a moving apology for the residential schools. This week, the Truth and Reconciliation Commission reported its findings and recommendations. The formal process was complete.

Since 1990, when aboriginal leader Phil Fontaine first spoke publicly about the abuse he had received, what we know about Canada's history has been irrevocably altered. There is now a lasting historical record of the era.

Once there is a will, it is not hard to determine the truth about the past, regardless of how long it has been buried. Politicians who hope to rewrite the narrative of their nations with lies and distortions tend to forget that survivors will tell their children, who will tell their children, and that ultimately nothing will be lost. One day, the ethos will change. The time will come for remembrance, as has happened in many countries. As it now has in Canada.

The reconciliation part is more elusive because it involves not just listening to the painful history of the "other," but also embracing it and willing change. It is a multigenerational process that is dependent on shifting public attitudes; on instilling imperatives of inclusiveness and the ability to empathize in young people; on ridding the public space of stereotypes.

Education is a major key, which is why it is often a battlefield.

Japan, for example, has never adequately acknowledged the massive crimes against civilians it committed during the Asia-Pacific war, and for the past half-century the question of what gets written in the school texts about that era has been a subject of bitter polemic.

The United States has never formally apologized to African-Americans for the institution of slavery, or the harm it has created across generations. The present hostility between young blacks and the police in several U.S. cities is ample testimony to that unreconciled history.

France fought an internecine ideological battle for half a century before president Jacques Chirac finally acknowledged in 1995 that his country had "committed the irreparable" by betraying its Jewish citizens.

Only postwar Germany eventually instituted a full-scale attempt at reconciliation. All German schoolchildren study the Holocaust and most are taken to visit the terrain of a former concentration camp. But it took decades before this could happen. Knowing the truth is one thing. The will to make amends is another.

A new challenge for Canadians will be to acknowledge the endemic disconnect between our myths and our reality. We view ourselves as a tolerant society that values diversity, but what the Truth and Reconciliation Commission has made clear is that we could believe this only because we excluded native peoples from the picture.

One key to reconciliation will be the rejection of all forms of coercive assimilation. For example, the Quebec Charter of Values, with its discriminatory rules about religious dress codes, was a throwback to attitudes that have historically produced ideas of lesser peoples.

The TRC has shown us where that leads.

The past can never be overcome. It can only be managed. With accountability on the part of lawmakers. With memorials to the victims. And with a major effort to pursue justice – however difficult that may be. 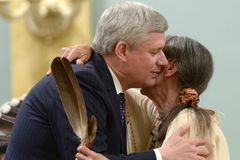