There was a time when former Surrey mayor Dianne Watts didn't think it was appropriate for a so-called outsider to waltz in and take over a party of which she had not been an active player.

That was back in 2010, shortly after Gordon Campbell had announced his resignation and the leadership of the BC Liberals was up for grabs. While saying she was "flattered" and "overwhelmed" by the "enormous pressure" she was getting to run, Ms. Watts demurred. The race, she decided, favoured those who had been around the cabinet table.

"For someone to come in and make it their own when they haven't participated in that is a stretch," she said at the time.

There are those in the Liberal party who still feel it's a "stretch" for Ms. Watts to want to lead a party that she's had little time for in the past. Nonetheless, she is arguably the biggest name in the race and the consensus front-runner – at least she was.

To say that her campaign has been underwhelming would be charitable. The words most often associated with it are "a total disaster." That assessment has mostly been based on the three public debates the party has held so far. Veteran columnist Vaughn Palmer of The Vancouver Sun wrote a devastating critique of her performance in the most recent event in Nanaimo, detailing how she fumbled embarrassingly through answers and failed to offer any cogent ideas.

Indeed, the opacity of the former federal Conservative MP's utterances would test the patience and intelligence of the world's most elite code breakers. Her response to a recent question about vision unleashed a cringe-worthy monologue of banalities and clichés.

"When a vision comes together it speaks to what we need in our communities and how it touches each one," she said at a recent event, a clip of which is posted to her website. She goes on. "When I look at where we've come from, we can build on those good successes but we really need to be moving into the future," she continued. She talked about the need to "connect" with people because "they don't feel that." It went on and on. It was a mind-blowing revelation in speaking without saying anything.

Ms. Watts needs to up her game dramatically, or the lead she started this race with will disappear, if it hasn't already. Fortunately for her, there isn't anyone among the contenders from the provincial Liberal caucus – Andrew Wilkinson, Todd Stone, Mike de Jong, Michael Lee and Sam Sullivan – who have broken from the pack to issue a more direct challenge.

Of the five, I would say Mr. Wilkinson and Mr. Stone have run the best campaigns and have had the most to say. Mr. de Jong, for all his assets, might be too weighed down by all that time in office. Mr. Sullivan seems happy to just stir the pot, which he does well. Mr. Lee is a wild card and, if you were looking for a dark horse to emerge from this group, he may be it.

Mr. Lee is young, smart, articulate, telegenic and highly likeable. He has, by all accounts, improved at each successive debate. His connections in the Chinese community, both in Metro Vancouver and outside of it, will undoubtedly help him. He has brought on a group of backroom specialists who know what they're doing, with at least one of them having deep knowledge of leading a compromise candidate to victory.

Back in 2006, Mr. Marissen masterminded Stephane Dion's unlikely win at the federal Liberal leadership contest. The convention played out pretty much exactly the way Mr. Marissen had predicted, with Mr. Dion slowly leapfrogging his way to the top after four ballots.

He had some luck along the way certainly, which is what Mr. Lee will need also. But the more Ms. Watts falters, the greater the chance the federal Conservatives in her camp will see Mr. Lee, a former special assistant to Progressive Conservative prime minister Kim Campbell, as a potential fallback choice at the convention.

One thing he will certainly have to do is present some ideas that set him apart from the others. That is something he has not done to this point. Instead, he has run a safe campaign, something a relative unknown can't afford to do. He needs to grab people's attention with his ideas.

Right now, the race is wide open. Any movement has been front-runner Dianne Watts falling back to the field. For her, the momentum is swinging in the wrong direction. 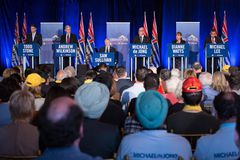