Marcus Gee is Toronto columnist for The Globe and Mail. In 1981-82, he was stationed in Singapore as a correspondent for the regional newsmagazine Asiaweek.

Praise for Lee Kuan Yew, who died on Monday at the age of 91, is coming in from around the world. Just about everyone agrees he did marvels for his country, transforming Singapore from a swampy colonial port to an economic dynamo in the course of a generation. What he did for the world was less admirable.

His main contribution was to legitimize the idea that you can have progress without democracy, at least the kind with a robust opposition, critical press and changes of government. Mr. Lee was prime minister of his city-state for 31 straight years, brooking little dissent. His son, Lee Hsien Loong, is PM today, though he is considered smart and capable in his own right. Their People's Action Party has held power since 1959.

"The exuberance of democracy leads to undisciplined and disorderly conditions which are inimical to development," the senior Lee once said.

Strongmen around the world applauded. Gulf State sheiks celebrated him. Russia's Vladimir Putin was a fan. A succession of Chinese leaders sought his advice. If he could raise his country to riches without all the fuss and bother of democratic politics, why couldn't they?

Even Western democracies sometimes wondered if he might have a point when he said that rampant individualism and cranky special-interest politics were holding them back.

The kind of leader that Mr. Lee personified – stern, fatherly, morally upright, far-seeing, a good shepherd to his flock – has enormous appeal even in a democratic age. If such a leader can deliver the goods, many would say, well, then, who cares about a free press or a critical opposition?

The trouble is that the world produces very few such leaders. Mr. Lee was all but unique, an incorruptible strongman who really did put country above personal gain. The "Singapore model" is a direct product of his personality. It is hard to think of a place that bears its leader's imprint so clearly.

A brilliant, London-educated lawyer, Mr. Lee led Singapore to independence and immediately set about remaking it in his own image: tough, disciplined, pragmatic, self-reliant. When he was prime minister, his officials and ministers all sounded like mini-Lees, with their clipped Singapore English and their no-nonsense talk about "the way we do things here."

Mr. Lee opened the country to foreign trade and investment but held a choke hold on politics, keeping the media tamed and the tiny opposition cowed. There is no denying it: the formula worked. Singapore averaged 7 per cent annual growth for decades, eventually surpassing its old overlord, Britain, in per capita income. Its transit system is extensive, its roads immaculate (and tolled), its schools top-notch, its parks gorgeous.

Singapore is hardly a totalitarian state, though you may face a caning for vandalism or hanging for drug trafficking. Open elections are held. The ruling party even lost some ground in the last vote in 2011. Clean, green and perhaps a little bit dull, Singapore is a billboard for what is often called soft authoritarianism.

But the formula wouldn't have worked without an essential ingredient: Mr. Lee himself. Just look around Singapore's neighbourhood. Indonesia's Suharto just next door advertised himself as a benign father of the nation. His regime collapsed under the weight of its corruption in 1998. Something similar happened to Ferdinand Marcos of the Philippines in the 1980s.

Without the check of opposition, the scrutiny of a free media and the threat of being tossed out by the voters, most leaders descend along the familiar path to corruption and brutality. That Mr. Lee did not was a function of his character, not of the virtues of the Singapore model.

What calls itself benevolent dictatorship is usually a bust. China's collective leadership has raised living standards, but at the price of enormous corruption and environmental destruction. Mr. Putin's bare-chested rule is curdling into aggressive nationalism.

Most dictators don't make the trains run on time. Far from being models of efficiency, authoritarian governments are usually disastrously inefficient, ridden with graft and – without any mechanism for an orderly transfer of power from one leader to another – prone to sudden collapse.

Mr. Lee's government was the exception to the rule. His success, sad to say, is probably not transferable. He worked on a small canvas: an island nation of 5.5 million about the size of Toronto.

For better models of development, look to other Asian success stories. Taiwan and South Korea have graduated from authoritarianism to full-throated democracy without sacrificing any of their economic dynamism.

So praise Lee Kuan Yew, by all means. He deserves the accolades he is getting for making his country such a an unlikely success story. But don't pretend he is a model. Strongman government without true democratic accountability usually ends in failure. 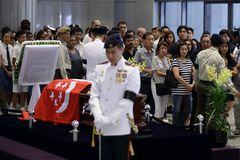 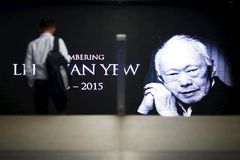 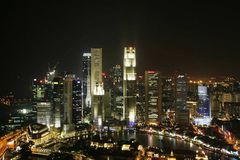