Public-private partnerships are not a new idea. By the time of Confederation, they were already old hat.

Sir Hugh Allan, one of the 19th century's most successful entrepreneurs, built a shipping empire with government subsidies designed to encourage the private sector to develop the infrastructure – ocean liners – to carry immigrants and mail between Britain and Canada. He then branched out into railroads, leaning on Quebec government subsidies to promote rail building. And a few years after Confederation, prime minister Sir John A. Macdonald's government awarded Sir Hugh the contract to build and operate the Dominion of Canada's National Dream, its great public-private megaproject, the railway to the Pacific.

Back then, the term "Canadian infrastructure bank" had not yet been coined. But Prime Minister Justin Trudeau and the leading lights of his cabinet were on Monday pitching global investors on something similar to the tool that 19th-century Canada used to encourage private investment in projects for the public good.

Take the Canadian Pacific Railway. British Columbia was induced to join Confederation in 1871 with the promise that it would be linked to the rest of Canada by railroad. That railroad was seen as necessary for Canada to grow, settle the West – and avoid being annexed by the United States. Building the railway was public policy. But it was felt that the only way to get it built quickly and at the lowest cost to the taxpayer was to hand the job over to private investors.

However, a railway across the difficult Canadian Shield, through the vast and largely unpopulated Prairies and over the Rockies, was not something investors were willing to sink money into without some public support. Which is where the public-private partnership comes in.

In 2016, the government is talking about creating a Canadian infrastructure bank, seeded with $35-billion in public money. The hope is that, for every public dollar invested, it should be able attract four or five dollars in private capital, thereby multiplying the impact, and increasing the amount of infrastructure built.

That's basically how Canada got investors to build the CPR. Ottawa gave the railroad $25-million in cash, agreed to reimburse $37-million in surveying cost, and granted it 25 million acres of land. Those inducements convinced private investors to deploy even more capital, resulting in the driving of the last spike in 1885.

There is almost nothing new under the sun, and building infrastructure through public-private partnerships is not a new idea. Nor is it a crazy idea. But it's not a magic idea. It doesn't conjure money out of the air. At the end of the day, somebody has to pay. And to the extent that it isn't the taxpayer, it will be the user.

The Trudeau government now has a group of investment bankers evaluating the possibility of privatizing Canada's airports, and another firm considering the ports. These don't even need to be public-private partnerships – if these assets are to be sold off, it should be a simple privatization. Canada's ports and airports don't need a taxpayer subsidy.

But if they are privatized, what they are going to need is heavy government oversight and regulation. Why? Because they're all monopolies or near-monopolies. Calgary isn't going to have multiple competing airports. If ports and airports – and sewage systems, electricity grids, highways and bridges – are privatized, the job of government becomes more essential than ever. It must protect consumers and citizens against the people who just bought its formerly public assets. It has to regulate the newly privatized monopolies so that they make a reasonable profit, but not more. Once the deals are done, it has to adopt a somewhat adversarial relationship.

Unfortunately, from the Gilded Age to the World Economic Forum, that's not normally how politicians tend to act when they start getting cozy with deep-pocketed men bearing gifts.

Canada's first great infrastructure project was a public-private partnership, but so was Canada's first political scandal. It led to the resignation of the first prime minister.

In 1873, in what became known as the Pacific Scandal, it was revealed that the public trust had been sold out. In return for the CPR contract, Sir Hugh Allan had given $350,000 to Sir John A. Macdonald's re-election campaign. A mari usque ad mare, caveat emptor. 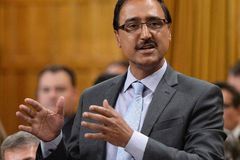 Trudeau touts Canada as safe option for infrastructure investment
November 14, 2016
Ottawa enlists Morgan Stanley to review ownership options for 18 Canadian ports Subscriber content
November 14, 2016
Follow us on Twitter @globedebate Opens in a new window
Report an error Editorial code of conduct
Due to technical reasons, we have temporarily removed commenting from our articles. We hope to have this fixed soon. Thank you for your patience. If you are looking to give feedback on our new site, please send it along to feedback@globeandmail.com. If you want to write a letter to the editor, please forward to letters@globeandmail.com.
Comments