We are all missing the point about The Interview, a movie no one can see.

Of course, since we can't see the film, it's hard to say much about its content. From the snippets online, it appears to hew to the decades-old formula of a screwball buddy comedy. The movie's plot revolves around a couple of doofuses, on a secret mission for the CIA, trying to assassinate North Korea's Supreme Leader, Kim Jong-Un.

Now, the movie's stars and its backers are in the middle of an international incident themselves. It appears as though North Korea was so piqued by this goofball of a movie that it is threatening 9/11-style terrorist attacks against cinemas which dare screen it and Sony Pictures cancelled its release.

And so The Interview, whose trailer includes a couple of lame jokes about "pee and poo," joins the pantheon of banned literature, film and art.

Move over Salman Rushdie, Seth Rogen is our new poster boy for the martyrdom of the censored.

But when The Satanic Verses was banned and Mr. Rushdie was the target of the Ayatollah Khomeini's murderous fatwa, individual citizens could strike out against this evil and support the author in a small but meaningful way: they could read his book.

With The Interview, however, how individual citizens should respond is a surprisingly complex issue.

The complexity stems not just from the difficulty of watching an unreleased movie – I suspect it will be released, perhaps straight to your PVR, making it a lot harder to stage 9/11-style attacks. Rather, the complexity stems from the movie's content.

Like the timeworn screwball buddy comedy itself, our understanding of North Korea is locked in its own formulaic context. We see the bizarre antics of North Korea's hereditary leadership – unusual hairdos, platform shoes and friendships with Dennis Rodman – and we roll our eyes. The very premise of The Interview fits in perfectly with our sense that North Korea is the silliest place on earth.

It's not. It's the ugliest place on earth.

It's time to put the guffaws behind us, ignore the inane antics of its leaders, and state the obvious: North Korea is the world's most repressive, vindictive and menacing police state. There is nothing funny about this gigantic gulag of a country.

Take just one example: in North Korea, punishment for some crimes – such as daring to escape the country – includes life imprisonment in concentration camps. However, a life sentence applies not only to the convicts. In some cases, the country's Three Generations of Punishment policy kicks in and convicts' children and grandchildren will also be sent to the camps. In other cases, convicts will conceive children in the prison camps. Those children and their children's children will be born in and live their entire lives in these camps, lives fraught with starvation and unspeakable brutality. They are slaves, but we go on laughing at their leader's haircut.

Not only do we laugh at North Korea's leadership, we now make blockbuster comedies about it. Nobody would make a comedy about a couple of shmoes trying to assassinate Bashir al-Assad, Robert Mugabe or any of the other thugs who are destroying their societies. But for North Korea, where starvation is thought to have resulted in millions of deaths, we enjoy it with popcorn.

The lesson to tomorrow's tyrant is clear: behave just a touch offbeat, and feel free to brutalize your population to your cold heart's content.

Which takes us to the challenge of The Interview. Of course, the way the movie industry has cancelled The Interview's release raises serious questions of intimidation and censorship. But the movie raises a bigger challenges still: what motivates Sony Pictures – and us – to see North Korea as an easy target for our laughs instead of our outrage?

Of course, North Korea feeds into this. It's weird and wild overreaction to The Interview distracts us from the real issue.

The real issue is the regime's brutality.

The best thing to come out of this small fiasco would be to shift our focus from the foibles of North Korea's ruling regime to its record of shocking cruelty to its own people, for that is the real fiasco.

The real villain in 'The Interview' cancellation is not Hollywood
December 18, 2014 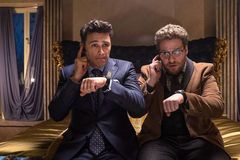 Sony hack adds to pressure on companies to step up information security
December 19, 2014