Coronavirus information
The Zero Canada Project provides resources to help you manage your health, your finances and your family life as Canada reopens.
Visit the hub
Contributed to The Globe and Mail
Published August 29, 2020 Updated August 29, 2020
Comments
Text Size

Re Mr. O’Toole: What National Unity Crisis? (Aug. 28): By my count, Erin O’Toole finds himself leading the Conservatives with a number of outstanding debts.

Mr. O’Toole capitalized on social conservative voters and now says he will “respect” those voices within the party. But what will this respect look like, particularly when he extended an invitation to the LGBTQ community in his acceptance speech?

How is Mr. O’Toole going to address climate change, a key issue where Conservatives have lagged? Mr. O’Toole’s biggest debt is owed to Jason Kenney, who endorsed him as a leader who would “fight for a fair deal for Western Canada.”

Given these debts, it will be interesting to watch Mr. O’Toole try to make gains in central and eastern Canada. If he manages to keep one foot in the canoe with the other on the riverbank without getting wet, then I think he will deserve to be Prime Minister.

Re Conservative Cohorts (Letters, Aug. 27): A letter-writer cannot vote for Erin O’Toole because he can only support a federal party that believes in Canada. What party is that?

If any of our federal parties believed in Canada, then they would respect the division of powers in our Constitution. That would provide the greatest expression of regional and cultural differences that are professed to be a great strength of our country.

A federal party that believes in Canada cannot have it both ways.

Does that star-spangled banner yet wave?

Re Twilight’s Last Gleaming (Opinion, Aug. 22): Contributor Omar El Akkad’s chronological account of the year the United States melted down felt like a deeply immersive dystopian satire about the future. It could have been imagined by Margaret Atwood or George Orwell.

Scarily, I realize that the U.S. is developing its own dystopian reality show – already equipped with star characters – and crafting episodes documenting its own demise.

Re Solving The Economy (Report on Business, Aug. 22): Let’s look to the derivation of the word “economy” – from the Greek oikonomia, meaning “household management” – and ask ourselves when we started to exclude household production from the economy.

Many households have never been more productive than during this pandemic, stretched to the breaking point between meeting the needs of children and seniors and without losing a place in the labour market.

Simon Kuznets, creator of the gross national product (the gross domestic product’s antecedent), warned against using GNP for social policy. He knew it didn’t count caring for our own families, and couldn’t distinguish between sales of armaments and sales of grain.

As we talk about “building back better,” let’s lose our obsession with GDP.

Re Learning To Live With The Dead (Aug. 22): At 84, I have had many experiences of loved ones dying. They were all, with few exceptions, older than me, so grief was manageable. Then, in January of 2018, my beloved, nearly 19-year-old grandson Joshua died suddenly.

This was devastating to his whole family. I have no recollection of the following few weeks or months. Apparently I met people, had conversations, carried on my usual life duties and made sense to outsiders. But I lost a part of me.

There is no time limit on grief. I’ve had professional counselling. I have family and friends who treat me lovingly. I adore my other grandsons and would do anything for them, but I miss the one who isn’t here.

Grief is a private affair, but because we need community, it is also a public one. There are two things that are most unhelpful. People often say, “I know how you feel” – no they don’t, nobody does, nobody can. The other is, “Well, things could be worse.” Grieving is not a contest. There are no degrees to grieving – grief just is.

I finished reporter Erin Anderssen’s story on grieving in tears. I thought back to the bout of weeping that would overwhelm me the year following the deaths of my father, brother, father-in-law and mother, all within 12 months.

What brought some solace, in addition to a compassionate psychiatrist who listened to my stories, was a line by C.S. Lewis, from a book on grief that my sister and I shared: ”The pain now is the happiness then. That’s the deal.” It helped. So did Ms. Anderssen’s article 13 years later.

Reporter Erin Anderssen’s poignant reflections are a welcome antidote in an unusual season of grieving. After having buried a beloved sister from our congregation just a few days before, Ms. Anderssen’s personal insights and those of her husband provided refreshing grace notes of hope.

I hope to encourage many others with that simple but profound prescription for grief: Healing isn’t forgetting, but remembering well.

Since my husband Ross died suddenly in 2009, at the tender age of 48, I have developed antennae for stories of grief. I study grief and facilitate grief groups to support others who have been in my shoes. Thanks to reporter Erin Anderssen for a personal and informative look at what life is like for someone grieving.

We mourn, love and continue to remember our person. We don’t want to forget. We learn to live with longing. My three children lost their dad at a very young age and will never forget him. He lives in our daily lives, our stories and our hearts.

Thank goodness that theories of grief are catching up with reality. I hope society can get that message, too. I try to communicate it daily.

Re Won’t You Please Shine Down On Me? (Arts & Pursuits, Aug. 22): Like reporter Eric Andrew-Gee, I too would be starstruck at meeting Raffi. As a lifelong preschool teacher, I had his music playing in my classroom regularly.

He also saved many van trips with three small boys in the 1990s. I can still hear my oldest saying, “Mummy, Five Little Ducks, again!”

My husband has mourned his brother for 40 years. In a time of loss, we could learn from him about living with the dead
August 22, 2020 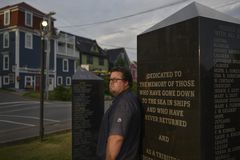