I got five on it

Re Who To Honour On The Five-dollar Bill? There’s Only One Choice (Jan. 14): I agree wholeheartedly with André Picard’s recommendation of Terry Fox for the $5 bill. It would be a fitting honour. He has been my hero for 40 years. His legacy, including the funding of cancer research, has lived on long after his life ended.

I remember the day Terry Fox ran into Toronto, his marathon gaining momentum every minute. I also remember watching a news report that he had to abandon the run because the cancer had returned. His Order of Canada was well deserved, but now it should be time for more.

With all due respect to André Picard, I believe there is another legitimate choice to honour on the $5 bill: Neil Peart, who recently died.

Widely considered to be one of the greatest drummers in history, many Canadians grew up air-drumming to the songs of Rush. There probably aren’t many Canadian men who haven’t at some time “air-belled” to Closer to the Heart. Rush’s intricate lyrics were a testimony to his intellectual intensity and complexity.

Mr. Peart was a musical hero both domestically and internationally. His genius should be recognized.

It’s impossible to argue with putting Terry Fox on our currency. However, I would far rather see his name attached to a public holiday. Future generations of children could be reminded annually of the incredible feats of this amazing man.

Perhaps it is time for Canada to pause each May to celebrate a true Canadian hero, instead of another country’s long-deceased monarch.

While I agree that Terry Fox would be an excellent choice for Canada’s $5 bill, I have another suggestion: I think the Queen should be on the front of the bill, and Prince Harry and Meghan, Duchess of Sussex, should be on the rear.

Re The Awkward Truth About Harry And Meghan In Canada (Jan. 16): Let’s put this in Canadian terms. When a goalie wanders from his crease, he can be body-checked like any other player. Beyond Windsor Castle, Prince Harry and Meghan, Duchess of Sussex, are just another couple who would endure the slings and arrows of all who partake of celebrity culture.

Two of the most recognized and beloved people in the world have chosen to live here. Prince Harry and Meghan, Duchess of Sussex, could live anywhere. We should be proud they chose to live in our home and native land.

People around the world are watching this unfold. Let’s do what Canadians do best: Be kind. Be gracious. Be welcoming.

Re When The Mind Gives Out Before The Machine (Opinion, Jan. 11): I was somewhat stunned to read contributor Margaret Munro’s excellent piece on pacemakers and the end of life. Her description of her father’s distressing end so closely mirrors that of my own father – it was unsettling.

I thought our family was unique, not in the fact of my father’s sad decline into ill health precipitated by heart disease (he, like Ms. Munro’s father, had multiple bypass surgeries and other invasive procedures) and ultimately into dementia, but because one of his devoted caregivers expressed to me how much she “hated” pacemakers. She said that after the person was gone, they kept “the body alive,” something I had never heard anyone say before nor since – until now.

Ms. Munro offers crucial information and asks important questions about pacemakers that we would all do well to consider. I thank her for sharing her story.

Doctors should discuss the pros and cons of the machines that keep one alive. I now need to update my will to be more specific in my end-of-life wishes.

Re Federer Fails To Return Thunberg’s Serve On Climate Issues (Sports, Jan. 13): Columnist Cathal Kelly has surely hit the nail on the head regarding climate change, hypocrisy and professional sports.

If cutting down on fossil-fuel emissions was really an issue of utmost urgency, one obvious measure would be to immediately ban all forms of motorized sport, then start an aggressive reduction in unnecessary travel. Among other things, this would quickly result in the curtailment of much of professional sports.

Of course, this would not happen, and any politician suggesting it would be out of office forthwith. If we are not prepared to accept great changes to our ways of life and freedoms, then democratic governments will not be empowered to make the drastic changes for which Greta Thunberg and the next generation are urgently begging.

Roger Federer is not only one of the most accomplished athletes of our time, he also distinguishes himself by his grace. Win or lose, he personifies class and dignity at a time when such qualities seem solely lacking in the world of sports – and politics. For him to be singled out for criticism by Greta Thunberg, because of a sponsorship arrangement with a company she has targeted, smacks of nothing more than opportunism to me.

I believe Mr. Federer deserves far better than to be portrayed as a climate-change villain by Ms. Thunberg, someone who thinks her sudden fame makes her fit to lecture those who fail to meet her much-vaunted standards.

Age ain’t nothing but a number

Re Aging Boom (Letters, Jan. 16): A letter writer references U.S. bioethicist and oncologist Ezekiel Emanuel’s 2014 article, "Why I Hope To Die At 75.” Dr. Emanuel wrote this when he was 57. I am looking forward to reading his thoughts when he reaches 75. As a family physician, I have many elderly patients and would disagree with him about letting nature take its course.

Agree to this degree

Re A Degree Of Uncertainty (First Person, Jan. 16): If somebody chooses to pursue a program that doesn’t seem as relevant to others, they have a decent chance of being judged for their academic path.

I can hardly remember how many people decided to berate me once I started working toward the page of paper I’d always known I should be getting, rather than the one society at large was desperate to believe I should have. Why be an educational assistant if you’re smart enough to be a teacher, right? No; true intelligence, as essay-writer Phoebe Knight doesn’t hesitate to make known, is honouring one’s authentic passion.

Opinion
Harry and Meghan have no idea: Immigrating to Canada is hard
January 20, 2020 Jan. 17: ‘Harry and Meghan should just relax, pull out their free coffee cards and be like the rest of us.’ Readers imagine life in Canada for the royal couple, plus other letters to the editor
January 17, 2020 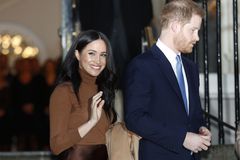