Re Fairy Creek Blockade 2021: What You Need To Know About The Anti-logging Protest In B.C. (Online, May 28): If there wasn’t a travel ban, more of us would be travelling to Victoria to save 2,000-year-old trees. Canada should stand up and preserve these old giants. There are not many left in the world.

Re After A Life Of Abuse, Helen Naslund Does Not Deserve 18 Years In Jail and Racism And COVID-19 Are Interlocking Pandemics Wreaking Havoc On Racialized Communities Across The Continent (Opinion, May 22): So much anger rising from the pages of the paper. Where to put it? What to do about it? Any solutions to our systemic problems seem elusive, if not impossible to imagine.

We are so ignorant of what is being done in our name (I mean mostly the white, privileged part of us). Acknowledging the role we play seems a feeble start to “fixing” anything. Changing school curriculums from the bottom up should be absolutely essential.

The gaps in my knowledge are immense. Though difficult, if The Globe and Mail promises to continue to confront us with facts, I promise to continue at the very least to try and absorb them.

Re The Real Problems With ‘Play Indians’ (Opinion, May 22): In the 1950s and 1960s, we played many different games, but none where people “ended up dead in pretend burnings, hangings, beatings, shootings and other inventive executions.” My education, although woefully inadequate in its portrayal of our First Nations, did not provide a “ubiquitous myth of the noble savage.” We weren’t “settler kids” – we were just Canadian kids. But I agree with almost everything contributor Michelle Good writes.

The chapter in Canada’s story about our treatment of our First Nations leaves a dark, shameful and abhorrent stain on the other bright pages in our national book. We have a long, long way to go on the road to reconciliation. We have taken baby steps on this trail, and we must persevere until we reach its end – no other conclusion should be acceptable to Canadians.

I believe “settler” rhetoric, however, will hinder rather than help us on this path.

I have almost been persuaded by contributor Michelle Good’s powerful argument that authors and actors should stay in their cultural lanes. Almost, but not quite. Because I must ask why she has limited herself to speaking only in her Indigenous voice, when she clearly has such command of language and imagery.

I think how impoverished we would be without the creative imagination authors and actors use to enter the world of others. We are richer when Shakespeare, Thackeray, Austen, Dickens, Tolstoy, Roth, Munro, Atwood and countless writers voice the words and lives of people we can never meet, but would have liked to know. We are richer when the “perfect person for the part” shows up on stage or screen.

I would like to open the doors to creativity, and not have them slammed shut in the pursuit of an ideal existence.

As a curator of settler origins at a small public art gallery, I strive to include Indigenous voices in every exhibition. We should learn the true history of this land, and understand contemporary issues faced by Indigenous people.

Authentic voice does not come from DNA test results but from lived experience, and contributor Michelle Good addresses the complexities included in that experience. We can be effective allies if we work to decolonize structures, staff and systems, but certainly not if we only take up space in the Indigenous community.

Re With Canadian Politics, It’s All In The Family (May 22): I believe ideas of inclusion wither every time inherited privilege is assumed. Principles of representation are damned by the raw calculus of winnability used to entice political sons and daughters, siblings and spouses. It’s a game each party plays ruthlessly and one where others, almost always racialized and female candidates, usually get pushed aside once again.

Dare party insiders explain that these deigned inheritors are the most qualified to lead? And that, after all, they are who voters choose? Is Canada a democracy or an aristocracy?

Re Cracking Down On Big Tech (Opinion, May 22): The bigger picture is the business model of social media, and that’s what our government should focus on. While we should address bad content when it starts to undermine social cohesion, we also should address the corporate profit engine that drives the promotion of such content.

Re Donor Supports Venice Biennale’s Canada Pavilion (May 22): “To recognize the anonymous gift, the National Gallery is renaming one gallery after its former director Shirley Thomson.” I knew Shirley when she was director and CEO of the Canada Council for the Arts and I was a board member.

She was brilliant in that position. Although my expertise was in the performing arts, she enlightened me about the visual arts.

She would have said, “Chapeau!” to the donor. I will say it in her stead.

In 1990, I wrote in support of Shirley Thomson’s controversial $1.8-million purchase of Barnett Newman’s Voice of Fire. I mentioned that in 1987, Vincent van Gogh’s Irises sold to the Getty Museum in California for over US$50-million.

She used that fact in her submission to the House communications and culture committee headed by Felix Holtmann, who was attacking the painting. My reason for supporting Ms. Thomson was that political interference amounted to censorship. But now her purchase is worth at least 20 times the original price. What vindication!

End of the line

Re Without Greyhound Buses, Small Towns Have Lost A Lifeline (Opinion, May 22): The end of Greyhound is the sad end of the Canada I grew up in.

The bus was the great equalizer, connecting the small towns of this country like CBC Radio. I loved sitting up front and getting to know the drivers during my many cross-country trips. My final three-day trip from Ontario to British Columbia was with most of my belongings in the freight compartment.

A fraction of the Air Canada bailout could restore this option for ordinary Canadians who can’t drive or fly.

Ontario to speed up second-dose eligibility for COVID-19 vaccines, starting with those 80 and older next week
May 28, 2021 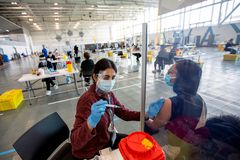 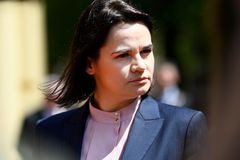 ‘Cold houses with no hot water’: N.W.T. village looks to rebuild after worst flooding in more than 50 years
May 28, 2021 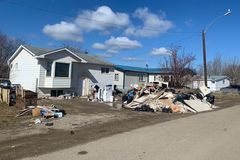