Re Fall Of An Icon: The Times Changed, But Don Cherry Wouldn’t (Nov. 12): Now that Don Cherry is gone, the more important challenge for the National Hockey League and its broadcasters should be to change the culture that celebrated him: to make hockey a sport that welcomes all, regardless of race, gender, sexual orientation and how long one has lived in Canada.

Hockey need only look to the National Basketball Association and the Toronto Raptors to see what a more inclusive sports culture looks like.

Now that Don Cherry is gone, perhaps his segment could become Player’s Corner. Every week, the show could feature captains of midget and junior teams across the country who could comment on the game. I would value their perspectives.

After a minor fender-bender in her 80s, my mother gave up her driver’s licence. Packing it in didn’t negate all the great things she had done over the years; she just decided it was no longer an appropriate vehicle for her. Don Cherry has done many wonderful things for Canada and local communities, and will likely continue to do so, despite Coach’s Corner no longer being an appropriate vehicle.

Don Cherry may have shot from the hip when he made his impassioned plea about wearing a poppy. But I know – and I think countless other Canadians do, too – that his feelings came straight from the heart.

I want to thank Mr. Cherry for everything he’s done to unite Canadians and make us proud to be a part of this great country.

I just watched two past Coach’s Corner Remembrance Day tributes from the time when Canadians were dying in Afghanistan. There were raw and poignant tributes to individuals who paid the ultimate price. Don Cherry made their sacrifices personal. Can anyone name a person more supportive of the Canadian Forces and veterans than Mr. Cherry? I can’t.

Re On Don Cherry (Letters, Nov. 12): A few letter-writers believe it’s a free country and Don Cherry should be allowed to speak his mind. Agreed. But why should he have a podium and be paid what was surely a princely sum for often speaking like a court fool?

Let him speak his mind over beers at the local tavern.

I, too, am an old, cranky, white male, born and raised in Canada from ancestors who arrived from Scotland in 1774. I have never seen Don Cherry as an icon – his notions about hockey seemed obsolete long ago. I believe the game is better because of practice routines developed by Russians, skating and passing perfected by Scandinavians, the elimination of the red line and better referees.

I also believe Mr. Cherry has the right to freedom of expression, but not on television, not with budding young players watching. The CBC should have clicked him offstage years ago.

Perhaps it’s time for Don Cherry to consider a career shift to where his temperament and views would continue to find a receptive audience: politics.

If you build it …

Re More People. Fewer Cars. Better City (Editorial, Nov. 9): Everyone in the housing business should know that the solution to the housing crisis is to build more housing, quickly and at a much higher density. For many years, the City of Vancouver seems to have worked very hard to prevent developers from doing so.

It never occurred to me that the solution would be Indigenous groups who can ignore all of the city’s requirements and build on their lands whatever they want, including 6,000 housing units on a relatively small parcel in the city’s Kitsilano neighbourhood. And with an abbreviated approval process, they can also finish construction much faster. Perhaps the city can learn some lessons here.

What that would require is strong leadership to defy special interest groups and do what is necessary to build more housing. At the moment, anyway, that kind of leadership seems in short supply at city hall.

The development industry seems to have greeted, with shameless enthusiasm, the Squamish decision to ignore zoning constraints. The Squamish are within their legal rights, but they should remember that Senakw will have value because it is in Vancouver, a city that is livable largely because of planning rules. The rules, though onerous at times, exist to protect the collective interest.

As well, when the Squamish were peremptorily evicted from Kitsilano in 1913, each head of household received $11,250 – at the time more than enough to buy two houses in the city. Then in 2000, the Squamish negotiated a $92.5-million settlement with Ottawa to compensate for Kitsilano and a North Vancouver property. And in 2002, the Squamish reacquired, after a court case, the 10 acres now slated for this development.

Surely the original sin of expelling the Squamish has been paid for. Yet the citizens of Vancouver will have to pay yet again with a massive development, unconstrained by regulation and designed without concern for transit, schools, parks or the local community.

Re Canadians Are Being Driven To Distraction (Folio, Nov. 9): While it is true that government policies and penalties can offer some disincentives to dangerous behaviours, there is another powerful motivator.

Following the Ontario decision in Hunt v. Sutton Group – when a woman, apparently drunk at an office holiday party, was injured – we all took notice. Office parties toned down, taxi chits were given out and attention was paid to how employees were getting home.

Never mind that the trial judge’s decision finding the employer liable went to the Court of Appeal and was sent back for a new trial. What we remember is that we can be held personally liable if someone we serve drives drunk and hurts themselves or someone else.

Plaintiffs’ lawyers have long known about the risks of impaired driving through cellphone use. Requests for cellphone records after collisions are the norm. In a 2017 case, Austin v. Smith, phone records were held producible just because the defendant driver had a phone in the car, without other evidence of use.

There’s nothing like a lawsuit to remind the community that there are consequences to actions. Your data will find you out.

It seems to me an easy and effective solution to the problem of cellphone use while driving would be to have a 24-hour seizure of the phone as a penalty, rather like a 24-hour roadside suspension of a vehicle. I guarantee that drivers would pay attention to this penalty.

‘There’s nothing like a lawsuit to remind the community that there are consequences to actions.’ How readers would fix distracted driving in Canada 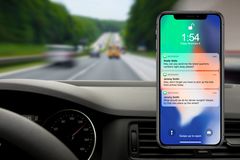 Opinion
What Vancouver City Hall should learn from Squamish Nation