The mistreatment afforded the Uyghurs is one strong argument. The Chinese handling of Hong Kong protesters is another. Even without those very valid reasons to stay away, most important is the Chinese incarceration of Michael Kovrig and Michael Spavor.

How can we possibly entertain playing games in China when, just down the road, two Canadians languish in terrible circumstances? I think the time has long gone to use quiet diplomacy to bring them home.

Re The Pandemic Is A Three-period Battle (Editorial, Nov. 23): As The Globe’s editorial points out, we were poorly prepared for this second wave. But there is conflicting advice to be found even within the same issue of the paper.

Contributor Lauren Dobson-Hughes reminds us that Doug Ford chose to play the role of father-knows-best while failing at testing and contact tracing (Our Governments Have Failed To Protect Us – And Now We Are Paying The Price). If he had taken more meaningful steps, Ontario may have avoided another lockdown.

Then again, a letter-writer from Australia tells us the lockdown there worked very well (Lockdown Countdown?). I’m reminded of a cough syrup commercial: “It tastes awful. And it works.” So maybe we should bolt our doors and read all winter.

But Karl Littler of the Retail Council of Canada wants us to get out and shop, shop, shop (Toronto’s Lockdown Threatens Small Businesses, Retailers Say). Fitness columnist Alex Hutchinson tells us to get out and exercise to avoid depression (Outdoor Exercise Will Be Key For Your Mental Health This Winter). A full-page ad invites us to consider just how grim our lives would be without restaurants. All this despite our lousy record regarding testing and contact tracing.

Canadians find themselves playing a game wherein the rules change from one period to the next, and the coaches keep offering conflicting strategies. I think Mr. Hutchinson was right about one thing: I can feel the depression setting in already.

That “our governments have failed to protect us” seems only half true.

Yes, the government failed to improve the ability of long-term care and education to weather another outbreak. However, the reason we are having these outbreaks appears to rest with those who have been gathering for weddings, funerals, parties and dinners, and spreading the virus into the broader community. These people don’t believe, or are unwilling to co-operate with, what doctors and governments have been saying.

There is an old saying: I have seen the enemy, and it is us.

Re Small Retailers Scramble To Survive Second Lockdown (Report on Business, Nov. 24): What a Christmas gift the Ontario government has given us! By mandating all small businesses be closed or offer only curbside service, it seems to have given big-box stores a monopoly to print money during the busiest retail season of the year.

Re Care Wait Times Growing Longer In Province (Nov. 21): In the 1980s, I worked as an outreach worker for seniors in my Alberta community. At that time, we had the highest rates of institutional care in the country.

Over time, at-home care was cut back; older people were encouraged to go into long-term care. Privatization was then encouraged by Progressive Conservative governments. People with little training, paid minimum wage without benefits, were employed in these facilities.

This has since proliferated. Without at-home care and encouragement to remain in communities, we now see the results in this pandemic. I am in my late 70s and determined to remain in my community.

Did we work, pay taxes and help our communities only to be put away when we get old? I implore those younger than 60 to start demanding community supports now.

Re The Health Minister Should Do The Right Thing (Nov. 24): I have great respect for Jane Philpott, who, let us not forget, resigned from federal cabinet on a matter of principle. However, I do not agree with Dr. Philpott and co-contributor Oyedeji Ayonrinde that Canadians dealing with such normal life experiences as pain, grief and anxiety need illicit drugs in order to achieve “wellness.”

By all means decriminalize these drugs, but let us also build resilience in our children so that they can deal with the vicissitudes of human existence without the “help” of opiates and tranquilizers. In the long term, I believe only that will significantly reduce the toll of addictions, overdoses and premature deaths.

Re RCMP Union Opposes Ottawa’s Plan To Ban Assault-style Rifles (Nov. 24): The new union for RCMP officers opposes a ban on assault rifles and this, The Globe’s article continues, “adds to mounting criticism of the Liberal gun control plan.”

Opposing an assault rifle ban should add to “mounting criticism” and distrust of the RCMP as an organization and of the officers who make it up. Recent incidents include preventable civilian deaths and injuries from Nova Scotia to Nunavut; a lack of response to freedom of information requests; a toxic workplace culture.

Laws should be made to protect Canadians. If the RCMP isn’t up to the job, they should be replaced.

Re A Deceit of Engineering (Opinion, Nov. 21): As a former resident of Niagara Falls, Ont., I was well aware of water diversions and flow scheduling. But I was always intrigued and mystified by the smooth lip of the falls and even flow as far out as my vision could see – so unlike anything else in the world. Erosion is never that uniform.

Thanks to contributor Daniel Macfarlane for enlightening this waterfall aficionado.

My dad, who was an engineer for Ontario Hydro, invited me and two high-school friends to venture onto the dry bed of the river, right to the lip of the falls. It was the adventure of a lifetime – and probably one that would horrify the workplace safety folk of today.

Few people believe me, but there is a photo to prove it. 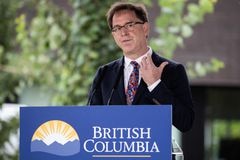