Re Ontario To Give Virus Tests To Some Schools (Oct. 6): Just last year in schools, hand sanitizers resided on every corner of every hallway of every floor, contact was limited between students and classes were half the size they are now. In contrast, I see many wishy-washy rules this year that are seldom consistent with one another.

Physical distancing seems a thing of the past with packed classrooms. Timmy can’t enter the school alone after hours, but during the day is allowed inside with hundreds of other students. He can safely take his mask off inside when eating with his friends.

The contradictions and inconsistencies should be clarified by government to provide unity in a time of confusion.

Re Trudeau Should Feel More Than ‘Regret’ (Oct. 8): Justin Trudeau speaks English. I speak English, too, but a different variety of it.

In neither of these usages am I suggesting I wronged anyone or did something blameworthy. So does Mr. Trudeau feel the same way about his “regrets?”

Re Trudeau Needs To Revive A Faded Cabinet (Oct. 11): I consider Patty Hajdu a bright light among Trudeau cabinet members. She has the admirable ability to talk like a normal human being. Ask her a question and her answer will likely be concise and to the point, delivered without handwringing or assurances of where the government “will always stand.”

If her one moment as “a noted figure” was her defence of China’s handling of the pandemic, then that may mean she rarely puts a foot wrong. That moment also occurred when Michael Kovrig and Michael Spavor were still in custody, and the origins of COVID-19 were (as they still are) up in the air.

I can’t speak for how those inside government see her, but for me she’s a breath of fresh air.

Re Canadian Democracy Is The Winner (Editorial, Oct. 11): Yes! I carry my little pencil from election day to remind me.

“Look south and be thankful.” How about look east and be jealous?

Most European counties have the same degree of scrutiny as we do in elections, but theirs produce outcomes that better mirror voter input. There is no reason why the mechanisms used by Elections Canada cannot be just as thorough if proportional representation was in place instead of first-past-the-post.

There would be minority governments with more seats for parties with cross-country appeal, more accurately reflecting the aspirations of Canadians. Those parties would need to compromise and respect other’s views, as legislation cannot be hammered through by a dominant party. Parliament would change and, I believe, for the better.

Re Friends Without Benefits (Opinion, Oct. 9): David Cohen, the U.S. nominee for ambassador to Canada, considers it “an appropriate role” for him to “make sure that Canada’s policies reflect its words in terms of the treatment of China.” The role of an ambassador to a sovereign foreign country is not to “make sure” that country behaves as desired, however worthy the objective.

Mr. Cohen should be reminded that Canada is not a U.S. vassal.

Re Abuse In The Catholic Church Is Demoralizing, But We Must Confront It (Oct. 11): With eloquence and reason, contributor Michael Higgins provides a powerful and necessary statement on what must be done to reform the Roman Catholic Church.

Let us hope that the synod announced by Pope Francis will be the occasion for the kind of fundamental changes that should take place. As Christ drove the moneychangers out of the temple, so should Pope Francis drive out those responsible for a legacy of lies and cover-ups.

Reconciliation can begin with 10 simple words: “I am so sorry for what happened on church watch.”

Sadly, an apology for French sexual-abuse victims is likely not happening. It seems that fears of massive compensation from such an admission are getting in the way of reconciliation. The bill could be in the billions. Many of these victims are still alive today.

If this is not resolved, the matter will just fester. I am sorry but there may not be any moving on.

Re U.S. Pipeline Politics Bites Canada, Again (Editorial, Oct. 9): The 68-year-old Line 5 segment crossing the Straits of Mackinac, where Lake Michigan and Lake Huron connect, suffers from possible corrosion and has been dented by recent ship anchor strikes. For many years, Enbridge was not in compliance with the maintenance and safety provisions in its easement agreement with Michigan. All this has made a pipeline – that should have been upgraded years ago – more vulnerable to rupture.

As Canada negotiates with the Biden administration on keeping Line 5 open, it should also insist that Enbridge improve its safety record. An oil spill in the Great Lakes would be a disaster for both countries.

Re Canada Post Honours Cartoonists With Stamps (Oct. 11): It is nice that Canada Post is honouring cartoonists with stamps. It is a bit puzzling, though, that Len Norris, whose brilliant cartoons adorned the pages of the Vancouver Sun from 1950 to 1988, is not included.

He delighted in afflicting the comfortable (especially politicians) and comforting the afflicted in his drawings. The “wacky” foibles of W.A.C. Bennett’s Social Credit government from 1952 to 1972 were a favourite target, but Mr. Norris also cheerfully mocked the doings and misdoings of Canadians and of the federal governments of his time. His drawings were also quite entertaining.

Oct. 11: ‘Let’s stop this condemnation. It feels all too sanctimonious of many Canadians who, until recently, were … dismissive of the history of Indigenous people.’ Judging Justin Trudeau’s trip, plus other letters to the editor
October 11, 2021 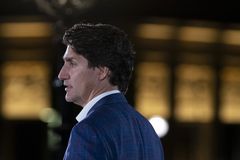 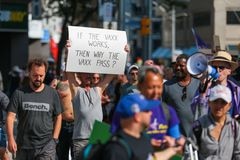 Oct. 10: ‘We are taking away left-turn lanes, right-turn lanes as well as normal lanes, all of which further snarls traffic.’ Is the war against bike lanes over? Plus other letters to the editor
October 10, 2021 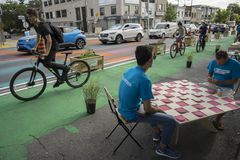