Contributed to The Globe and Mail
Published October 28, 2019 Updated October 27, 2019
Comments
Please log in to listen to this story. Also available in French and Mandarin. Log In Create Free Account

Re Alberta Finance Minister: ‘This Is Not A Boom-time Scenario’ (Report on Business, Oct. 25): The end of a commodity boom is nothing new; what is unique to the decline of Alberta’s oil is that few people in the province were around when the boom began, and expectations seem to have become skewed.

When people rushed to the Yukon in the 1890s, they did not expect gold to be sustainable; they saw it as a temporary adventure from which they might prosper if they acted fast. Few Albertans now have memories of the mostly agrarian economy that preceded the Leduc oil discovery in 1946. Rather, many people moved from elsewhere for lucrative careers related to oil or they were born amidst the boom.

The loss of oil would therefore seem more acutely felt – it undermines an ingrained understanding of economic life in Alberta. It is unfortunate that more of the wealth was not channeled into sustainable prosperity, and sympathy is needed for any transition to a low-carbon industry. But otherwise, to my eyes, Alberta’s oil narrative is nothing more than an elongated Klondike.

With Justin Trudeau re-elected, perhaps a new pipeline will be built. It will start in Ottawa and run to Quebec City. It will be filled with money extracted from Western Canada, and pumping will start immediately.

The first cut is the deepest

Re Alberta Unveils Austerity Budget With Deep Cuts To Public Service (Oct. 25): If Alberta’s budget results in strife with its civil-service unions, so be it. The civil service in many Canadian jurisdictions have compensation packages far richer than those in the private sector, and employees often enjoy unmatched job security.

For the future of Canada’s economy and taxpayers’ pocketbooks, one hopes similar discord breaks out across the country, and soon.

Re Thousands Of Canadians Have Died From Overdose. The Silence Of Our Federal Leadership Is Deafening (Online, Oct. 18): I support Jordan Westfall and David Mendes’s plea for “safe drugs” and better federal leadership to address the “worst public-health crisis in a generation.”

However, the upstream cause of this epidemic also needs to be noted: High levels of socioeconomic inequality, which drive diseases of despair, including alcohol and drug addiction, as well as increased mental illness, suicide and crime.

We do need policies that will help reduce the opioid death rate, but there will still be millions of addicted people needing detox, rehab and other treatment programs and support services. It should be just as important to develop policies that reduce inequality and poverty.

Re A Librarian’s Stirring Call For Free Speech (Oct. 19): Hats off to city librarian Vickery Bowles for standing up for free speech at the Toronto Public Library and a controversial event on Oct. 29 organized by journalist Meghan Murphy. It is more important than ever to fight for free speech, especially when it goes against your own beliefs.

How do young people learn critical thinking if all they hear is one side of an issue? It is too easy now to live life among opinions that conform to ours – until it is too late.

Re Catch of The Day: We Need To Rethink Fish As Food (Oct. 21): In a world that is predicted to have fish-less oceans by 2048, we can no longer afford to be silent. There should be no such thing as sustainable fishing.

Our neglect of fish and the torture they endure is harrowing. This is evidenced by the fact that we can’t even be bothered to count their deaths in numbers; instead we use their weight in tons.

As someone who has been fishing since he was six or seven years old, I’ve always believed in treating fish humanely and eating what you keep. I also think contributor Jessica Scott-Reid is correct that we should treat farmed fish with respect and care. But I believe she makes a leap when she suggests that caring about fish “means leaving them alone.”

Re Top Canadian Course Threatened By Urban Sprawl (Sports, Oct. 19): I work as a turf technician in the summers at Eagles Nest Golf Club in Vaughan, Ont., a beautiful course in the middle of the city. I enjoy going to work and feeling as if I am miles away. To me, it would be a shame to redevelop land used for sport and sociability.

Those that argue in favour of real estate development should also consider the associated consequences: higher water and air pollution, more traffic, loss of agricultural area and increased taxes. Despite recent debate about the relevancy of golf, and unless developers can protect some green spaces in their plans, it should be in the best interest of municipalities to keep golf courses open.

Re Have The Raptors Taken Canada’s Outpouring Of Love Too Much To Heart? (Sports, Oct. 23): I was overjoyed to watch the Toronto Raptors receive their rings and raise a championship banner. As I cheered in front of the television with my family, I took pictures to commemorate this extraordinary Canadian sports moment. I later read columnist Cathal Kelly describing the events in a manner that couldn’t have been more negative.

First, I don’t believe fans were snubbed, as those in attendance were treated to replica rings. Second, players and executives deserved their bling after all the past disappointments. And last, not focusing on Kawhi Leonard seemed fine – most fans will cheer him when he returns in December.

The point of the night was to celebrate the team and allow fans to participate however they wanted, whether at the arena or at home on the couch.

I have two words for the Raptors’ championship ring: an obscenity.

I was at the Toronto Raptors home opener and championship ceremony.

As a season-ticket holder, a team representative came and thanked me and my family for supporting the team – my seats are nowhere near the court. I do agree that the championship rings were outrageous. However, isn’t that just a reflection of how far beyond reality the lives of professional athletes and team owners have become?

After winning an elusive championship, the Raptors players and staff deserved their special moment with the fans. As a fan, I believe a balance was achieved.

Opinion
Alberta is about to learn how the other half lives Subscriber content
October 25, 2019 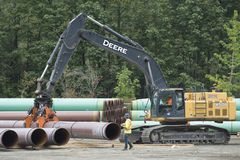