On Sept. 12, the U.S. government responded to Canada's inquiry on the pricing for 18 Super Hornets. The price tag came back at $6.4-billion. If the sale goes through, it may end up being one of the most wasteful fiascos ever undertaken by a Canadian government. It strips away the Liberals' election claim about managing the defence file better than the Conservatives, while illustrating extreme mismanagement.

So, what do we actually get for $6.4-billion? In addition to the 18 aircraft, the offer includes the ancillary equipment required to operate the aircraft and support from the manufacturers.

The total cost is surprisingly high, especially given the projected cost of replacing the existing CF-18 fleet with 65 F-35s. According to the Department of National Defence's 2014 figures, which remain roughly accurate today, acquiring 65 F-35s with ancillary equipment and support comes to roughly $9-billion. To lend further credibility to these numbers, the Danish government's 2016 assessment showed that acquiring 27 F-35s would cost approximately $3.7-billion.

What accounts for this massive disparity? The first is production scale. Boeing can produce a maximum 36 Super Hornets a year, while Lockheed Martin will produce 90 F-35s next year, and more than 150 in the year after that. This difference results in greater economies of scale, and a lower cost. The F/A-18s also require additional sensors and pods and adapters that come standard with the F-35.

Moreover, the United States charges Canada for the development of the Super Hornet and administering the contract. Those fees are waived for the F-35, as Canada has already invested approximately $455-million to be part of the Joint Strike Fighter (JSF) program. Finally, the Super Hornet would require modifications to make them suitable for Canadian use. Far from being an easy transition, this will only further drive up the cost. With the F-35, Canada had many of those modifications incorporated into the design as a member of the JSF program.

All of these issues, which resulted in the Conservative government's decision in 2010 to bypass the Super Hornet and instead select the F-35, are well-known to senior defence officials. However, this reality did not suit the incoming Liberal government, which made an election promise to exclude the F-35 from any future competition. Of course, that course of action would be illegal. Their decision to then pursue a fleet of interim Super Hornets was based on the dubious claim that they required an aircraft "not in development."

The irony is that in order to make the Super Hornet work for Canada, it requires significant additional development: more so than the F-35 (which concludes its development program this year). Nevertheless, the advice of senior defence officials has clearly been ignored. This was the entire point of a gag order, which sought to muzzle the officials so they could not speak out about the looming boondoggle.

The interim buy comes with added issues, such as extending the life of the current CF-18 fleet until its replacement comes online, sometime in the late 2020s. The last such upgrade undertaken in the 2000s came to around $3-billion, which provides a rough benchmark. This brings the total cost of this misadventure to over $9-billion – or more than the projected cost of replacing the CF-18s outright with 65 F-35s.

Canada will soldier on with a hopelessly obsolete fighter fleet, and still need to spend an additional $9-billion or more procuring its actual replacement, delayed by nearly 15 years. This is the cost to the taxpayers of defending a poorly conceived election promise not to purchase the F-35. There is no military or financial reason for this, except to defend the vanity of this government. Taxpayers should not accept this level of mismanagement.

The Liberals need to immediately cancel the interim buy and pursue a permanent fighter replacement competition. It's about time they put an end to this farce, sooner rather than later. 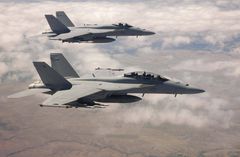