Reginald W. Bibby holds the Board of Governors Research Chair in Sociology at the University of Lethbridge. Andrew Grenville is chief research officer for Vision Critical.

Such is the case these days with respect to some claims about life after death.

In the past few weeks, we have been exploring the topic of "life after death" via Angus Reid Global surveys in Canada, the United States and Britain. The samples have included close to 5,000 people who are representative of the three populations. We started with an interest in tracking belief in life after death. We have found much more.

What's intriguing is the extent to which people haven't given up on the possibility that life continues after death. What's startling is the extent to which they believe that individuals who have died are continuing to follow what is taking place in their lives and – even more – continuing to be in contact. What's puzzling is that this belief persists despite a substantive decline in religious beliefs and behaviour.

Belief in life after death has remained steady for some time now. In Canada, for example, about 50 per cent of adults say they believe in life after death, about 30 per cent are uncertain and just 20 per cent rule out the possibility altogether. Those figures are virtually unchanged from 1975. At the same time, however, service attendance has declined considerably, and the number of people who say "I don't know" when asked about basic Christian beliefs has skyrocketed.

Over the years, we have had a sense that many people who attend funerals don't really think "this is it" – be they religious or not. Our surveys confirmed the hunch. Close to 40 per cent of Canadians say they "definitely" or "possibly" will see people again who have died. Some 30 per cent say they don't know, and only about 30 per cent have actually closed the door on the possibility, including just one in two of those who have "no religion."

But what we have been taken aback by is the remarkable extent to which people believe that individuals who have died are interacting with us.

More than five in 10 Canadians think the deceased see us, know what we are up to, and share in our lows and highs. About four in 10 claim that they themselves "have been in touch with someone who has died" – up, by the way, from 25 per cent around 1980. Differences by age and religion are negligible. Similar levels and patterns are also found in both the U.S. and Britain – which have very different religious histories and trajectories – leaving us scratching our heads as to where these beliefs come from.

Those hefty numbers represent a lot of seemingly average people who we see and talk to every day. They are hardly an eccentric minority.

The findings underline a paradox in the Information Age: We know more than enough about just about everything in life. But we continue to know very little about what happens after death. Credible expertise is scarce. Academics are reluctant to touch the topic, and religious leaders tend to have little to say. The extensive market is left largely to channelers and charlatans, with the predictable result that claims are trivialized and claimants stigmatized.

Obviously, clear-cut answers relating to all this are extremely elusive. Yet the questions and beliefs are far too important and common to be ignored. It's time to take a closer look.

Opinion
An Easter funeral: Death is not the final word
April 18, 2014

Think beyond the chicken coop with these four egg varieties
April 18, 2014 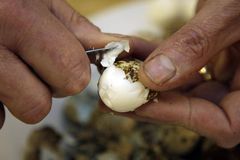