Rick Perlstein's Nixonland, published in 2008, was one of the most celebrated books about U.S. politics in the modern era. Its content swept across American life during the years before and during Richard Nixon's presidency - a presidency that featured the "Southern strategy," the "culture wars," Vietnam and its discontents, economic upheaval, Watergate and so much more turbulence.

At the book's heart, of course, was the brilliant, brooding, socially awkward, intensely private, conspiratorial Mr. Nixon, who, more than any other U.S. politician, shaped conservatism from his entry into Congress to his resignation as president.

Globe columnist Lawrence Martin has adapted Mr. Perlstein's title for his book about Prime Minister Stephen Harper, who, without stretching the point, has certain Nixon-like tendencies that make comparisons interesting if obviously not exact.

Harperland has a narrower focus than Nixonland, more microscopic than panoramic, because Mr. Harper, after all, has been prime minister for only four years, during which - apart from the recession - there've been no serious national upheavals.

Mr. Martin talked to many of the people around Mr. Harper in his early prime ministerial years - they're all gone now - and gives them ample opportunity to explain why the government took the shape and displayed the attitudes that it did. Those comments are very helpful, especially for those who don't follow politics closely, in figuring out why this government has been unlike any that preceded it - not in policy as much as in style.

There's no doubt that the constant minority governments have influenced how the Harper government behaved. The fear of imminent defeat induced the Prime Minister and his team to think about politics all the time.

Every party in power thinks about politics, but this one was, and remains, consumed by political implications, political optics and political messaging, as Mr. Martin meticulously explains with reference to Mr. Harper at meetings and how his staff prepared everything for maximum political exposure.

Mr. Martin quotes former trade and foreign affairs minister David Emerson, who switched from the Liberals to the Conservatives, as noting how much more disciplined Mr. Harper was compared with Liberal prime minister Paul Martin, but also how much more partisan the Harperites were than anything he'd witnessed under Mr. Martin.

And here's where the interesting comparisons arise between Mr. Harper and Mr. Nixon. By all accounts, and especially those in Harperland, the Prime Minister is not only a partisan, as all prime ministers must be, but he viscerally hates Liberals.

His objective is not just to defeat but to obliterate the Liberal Party of Canada. For that purpose, the gloves are off all the time, from nasty attack ads against Liberal leaders to ritualistic, partisan punches from him and his ministers.

Mr. Nixon saw enemies everywhere: in the media, the "liberal elites," the Ivy League colleges. He was an outsider - a graduate of little Whittier College - who carried himself awkwardly and was socially ill at ease in many settings. He carried enormous resentments, remembered many past slights, and bottled them up inside where they fed paranoid streaks in his character. He was a control freak, and demanded that his staff act accordingly.

He was also very smart, worked exceptionally hard, never gave in, and had an instinctive understanding about the ambitions and frustrations of white middle-class Americans. He had more of a social conscience than he was credited with and, as the years went on, he grew out of his early Red-baiting anti-communism to develop a realpolitik view of the world that meant pragmatism, dialogue with foes and, ultimately, a trip to China.

Harperland, a.k.a. contemporary Canada, is not governed by someone with paranoid streaks. But there are in Mr. Harper wellsprings of resentment, a desire for absolute control of events and surroundings, a deep distrust of spontaneity, a fierce partisanship, a wariness about others, a temper, and a stubbornness that can be both admirable and self-defeating.

But there's also a steadiness of purpose, a strong sense of how he wants to change Canada, a keen intelligence, an ability to learn and evolve, a personal honesty, and a capacity to focus all these considerable talents on objectives, short and long term.

Mr. Martin writes: "He was caught up in his own internal war." 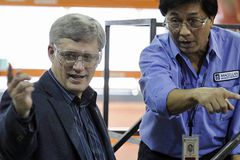 Tories among hundreds of census supporters who emailed Harper
October 7, 2010 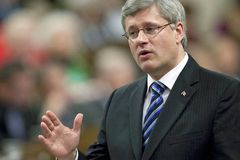 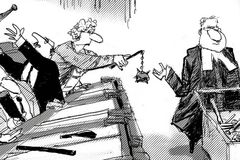 A coalition government is no fantasy
October 6, 2010 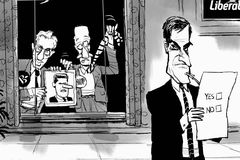 For Tom Flanagan, Harper book shows Ottawa 'puts too much on confidentiality'
October 6, 2010 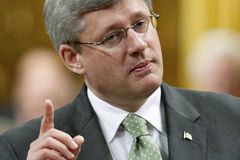