Kevin Cokley is director of The Institute for Urban Policy Research & Analysis at the University of Texas at Austin, and author of The Myth of Black Anti-Intellectualism. He tweets at @KevinCokley1.

With the United States still mourning the deaths of the five Dallas police officers, Alton Sterling, and Philando Castile, another grim chapter to the country's nightmare was added by the murder of three more police officers in Baton Rouge on Sunday.

Fear and paranoia now firmly grip African-Americans and law enforcement in the United States. A weary President Barack Obama is calling for national unity, and imploring us to "temper our words and open our hearts." A majority of Americans say the next president should focus on improving race relations, no doubt in response to the racial tensions underlying police killings.

It is difficult to say something profound and make sense of these senseless deaths. What is not helpful is to blame the words and actions of Mr. Obama for getting cops killed, as several Republican leaders have, when data from the Officers Down Memorial Page actually show that police fatalities are lower under Mr. Obama than the previous four presidents.

What is not helpful is the valuing of one life over another, which is the very reason that the Black Lives Matter movement was created. However, an unfortunate binary has been created that forces people to see the deaths of police officers as more tragic than black people, or vice versa. When police officers are killed in the line of duty, some politicians have loudly and repeatedly responded by saying we need toughness and law and order. When Mr. Sterling was killed, presumptive Republican presidential nominee Donald Trump initially avoided making comments. When he finally commented on the Sterling and Castile deaths, he made a generic statement about the "senseless and tragic deaths of two motorists" with no mention or acknowledgment of the concerns African-Americans have about policing of black people, thus stripping it from its racialized context.

Worse than the generic comments are the racially inflammatory comments that serve no purpose other than to score political points. Lieutenant Governor Dan Patrick of Texas excoriated the Black Lives Matter protesters for being "hypocritical" for running from the sniper's bullets. Former New York governor Rudy Giuliani characterized the BLM movement as "inherently racist."

It is tempting to make this into an "us vs. them" dynamic, but it is not that simple. The intersection of identities complicates this narrative. Consider the plight of black police officers. David Brown Sr., the black chief of police in Dallas, exuded strength and character in the wake of the Dallas police shootings. He acknowledged that on most days police do not feel appreciated. Yet his impassioned words struck a powerfully emotional yet non-accusatory tone as he sought to bring healing to his community.

How can one not feel the pain and anguish of police officers' families who fear each day that their loved ones may not return home alive? It is the same pain felt by the family members of slain unarmed blacks. We have to stop seeing a person or group of people as being intrinsically different from oneself: a process referred to as "othering." America's unresolved problems around race makes it difficult to see our shared humanity and feel one another's pain.

Race and institutional racism have desensitized us to the tragedy of the loss of life. What is forgotten in all cases, whether it is an unarmed black person or a police officer, is that someone has lost a family member and loved one.

We must recognize this simple fact. We are at a crossroads as a country. As we have seen, hypermasculine posturing evoking law and order will not solve our race and policing problem; neither will militant groups espousing violent rhetoric. As Martin Luther King Jr. once famously stated, "We must live together as brothers [and sisters], or perish as fools." Will we as a nation finally come to terms with our race and policing problem and implement the necessary changes to policing that will create more trust and reduce the fear that exists on both sides? Only time will tell. 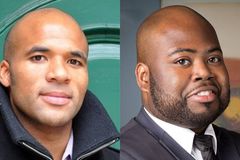