Julie Barlow and Jean-Benoît Nadeau are the authors of The Bonjour Effect: The Secret Codes of French Conversation Revealed.

The French presidential campaign has been one of setbacks and comebacks. But while much ink has been spilled over Marine LePen's dour prognoses, and François Fillon's high-handed intransigence, the real story of the French elections is the return of sunny optimism. Yes, optimism. That's what the independent, 39-year-old centrist candidate Emmanuel Macron embodies. And that's why, although Mr. Macron lacks ideas, the French will make him their next president.

Ms. LePen has led a redoubtable campaign mostly capitalizing on French fears. But she can hardly be credited for allowing the French to release their pessimistic streak. Who would need to? The French invented an entire subset of terminology to give life to the conviction that things inevitably get worse – everyday maxims like, "tout va mal" (things are going downhill), "tous pourris" (all rotten), "ce n'est pas possible" (impossible!), or, perhaps the most all-encompassing of them, "La France n'est plus ce qu'elle était" (France isn't like it used to be.)

It's hard to pinpoint exactly why, but over the centuries the French have developed the belief that speaking optimistically about life makes you sound stupid. When in France, it's always better to err on the side of doom.

Ms. LePen has built her following by reinforcing this age-old French reflex of seeing the glass half empty. More specifically, she has broadened her support by deftly reintroducing to French political discourse topics that have long been considered taboo: immigration, Europe, and Islam. For decades, the French left has refused to even broach these topics out of fear of reviving the nationalist impulse that brought France to the brink of disaster in the Second World Word. So when it comes to touchy themes, Ms. LePen has had the playing field all to herself. Her popularity is rising because she has given voters a chance to vent about subjects that the rest of the political class avoids.

But impressive as her rise in the polls has been, when it comes to breaking taboos, Ms. LePen has nothing on Mr. Macron, who is the first presidential candidate to ever tell the French it's okay to be optimistic. Mr. Macron has struck the right chord because, under the facade of negativism, the French are surprisingly optimistic.

As rampant as pessimism seems to be in the culture that produced Voltaire, it's mostly a posture the French adopt in public. In private, intimate conversation, the French usually show themselves to be the opposite. An Ipsos survey released last winter asked the French where they thought their society was headed. Eighty per cent checked, "on the wrong track." But when the same individuals were asked to characterize their personal future, 81 per cent said they were content.

There are other statistics that suggest the French have a deep – if repressed – optimistic streak. France's birth rate is the second highest in Europe. The proportion of French who start businesses is higher than any of their immediate neighbours, and proportionally higher than Americans. This faith in future prospects just doesn't square with the pessimistic posture the French assume in everyday conversation.

In this, the French are the opposite of Americans, or – even more broadly, of North Americans – who managed to turn optimism into a cultural trait. We North Americans can muster a smile out of expediency, even when we are burning with resentment. The victory of Donald Trump, for that matter, owed at least something to liberating Americans' closet pessimism.

Mr. Macron is doing the same thing in France, in reverse. His resolute optimism is galvanizing a population that has been held hostage to public displays of pessimism for decades. The French can't say it publicly without being ridiculed, but they are intimately aware that they have it good. It's hard to argue that their society, while far from perfect, is anything but prosperous and tolerant – certainly as much as either Germany or Britain are. France is rich in resources, both natural and human. The French language still provides access to a global cultural, intellectual, scientific and industrial network. France is not a country on the brink of disaster.

In jest, we say that Mr. Macron is France's version of Justin Trudeau, not just because he shares with the Prime Minister a sunny, almost naive demeanour. The real similarity is in their willingness to go out and be idealistic in full public view. In France, both the left and the right have eschewed this idealism for too long. Mr. Macron's success is not just the result of Republican candidate François Fillon's misfortunes. France has never seen a centrist candidate like Mr. Macron rise so high, so quickly – even after France's political class initially ridiculed him for naming his new movement, "En marche!" (Forward!). He has succeeded by identifying and capitalizing on a strong, though strongly repressed French impulse – optimism.

Opinion
In France and Britain, for want of an opposition the EU could be lost
April 18, 2017
Opinion
Le Peuple: France has a long history of populist upheaval
April 17, 2017
Opinion
Ignore the polls – France’s election is far from over
April 10, 2017 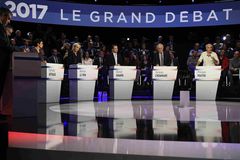