Citizens can be almost certain that, when governments use public money to write history, the result will be a deformed version of the past. So it has proved to be with the Harper government, with more rewriting to come.

The Conservatives display two-facedness in the telling of history, systematically reducing the role of the informed and the neutral in explaining the country to Canadians, while enhancing the capacity of the government to cherry-pick what it chooses to highlight.

In the last budget, for example, funding was reduced for Library and Archives Canada, the CBC, Telefilm Canada, the Social Sciences and Humanities Research Council and Parks Canada by a government that had already scrapped plans for a National Portrait Gallery. (The government also is eliminating support for scholars in other countries who study Canada.)

The government spared the National Gallery, the national museums in Ottawa and the Canada Council, but the net effect on the ability to explain history in an unfiltered way through people and projects funded by public institutions was reduced by the cuts.

By contrast, the government found money in a "restraint" budget for projects that will allow it to highlight those scattered and fading (or faded) remnants of our history that suit the government's political agenda: recreations of the War of 1812 (a political civil war on each side and a cross-border military conflict), medals commemorating the Queen, and yet another royal visit, this one offering Canadians (or at least the handful of them who will care) the emotional surge of seeing their future king and queen: Charles and Camilla.

For the Harper Conservatives, there's no sense of contributing to a new or evolved sense of Canadian identity, but rather a reaching back and dusting off of fragments of the past that suit their politics – which is why the military and the monarchy are their favoured subjects for historical attention.

There's also the enigmatic legend of John Diefenbaker, the Progressive Conservative prime minister from 1957 to 1963. In reaching back for Mr. Diefenbaker, Canadian Conservatives are contorting themselves as U.S. Republicans do.

For them, the two Bush presidencies have been airbrushed from public incantations of Republican history. Instead, Ronald Reagan has been placed atop the pedestal of Republican adulation, his missteps resolutely forgotten, his triumphs retold, his rhetoric repeated, his ideology extolled, even if that ideology was frequently at variance with his deeds.

Mr. Diefenbaker was a weak prime minister, or at least that's what Canadians came to believe after seeing him in office for a while. They handed him the largest majority then recorded in Canada in the 1958 election. Halfway through its mandate, his government was tearing itself apart, and Mr. Diefenbaker was flailing and failing.

By 1962, with the cabinet in revolt, his party was reduced to a minority. A year later, Canadians booted him and the Progressive Conservatives from office. It took four excruciating years to drag Mr. Diefenbaker from the party leadership.

Historian Denis Smith, who has written by far the best biography of the PC leader, Rogue Tory, said Mr. Diefenbaker lived a life of "turmoil, rebuff, failure, disappointment, and bitterness more than of triumph and satisfaction."

Mr. Diefenbaker's time in office was judged by a majority of his countrymen at the time, and by almost all historians, as largely a failure offset by a few triumphs. But by carefully selecting episodes from his life and certain of his successes, his admirers managed to construct a modest legend around Dief the Chief, a legend that does a disservice to historical fact but offers a fillip of inspiration to those who idealize his memory.

The legend leads the Conservatives to slap the Chief's name on ships, buildings and other bits of contemporary Canada, a response, one presumes, to all those Liberal names across the country.

History is never written in stone; it's always being checked and rechecked, written and rewritten. Arguments about the past never cease, and it's intellectually worthwhile for such arguments to be made by those who learn history and/or write it, often with the support of the very institutions the government's now cutting.

When governments take up the pen, fill it with the ink of public money, and start rewriting the past, political agendas chase the search for historical understanding.

What the Avro Arrow should have taught Ottawa about the F-35
April 5, 2012
Sir John A. Macdonald would back Harper and the Northern Gateway pipeline
April 30, 2012 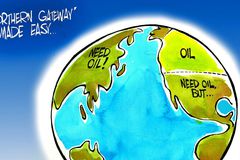