Ontario is six months into the immense governmental restructuring initiative kicked off with last February's Commission on the Reform of Ontario's Public Services. Already, this effort has produced political shock waves, leading to a rupture in the alliance between the teaching profession and the Liberals that was instrumental to McGuinty's tenure in office.

The largest transformation of Ontario's sprawling health system in years is underway, as is a large-scale reform of the province's post-secondary education system. Delivery of other public offerings is under review in a host of exercises covering everything from lotteries and gaming to local electricity distribution.

Whatever the partisan calculation, or the life decision-making, may have been for Mr. McGuinty and family over the past few weeks, part of it must have been the desire to break the logjam that had been put in place by the split electoral decision of a year ago. The minority parliament elected last October 11 had degenerated from uncertainty to unworkability.

Last fall's manoeuvring over the Speaker's election, the spring's budget deal/no-deal with the NDP, and now this autumn's donnybrooks over teachers' salaries and gas plant cancellations – each step in the drama erected a higher barrier to getting on with the business of putting Ontario's government and society onto a more sustainable course.

Inexorably the pressure to blow up the deadlocked parliament has mounted. This in turn has begged the question of the Premier's personal intentions. The issue of Mr. McGuinty's future had come to loom larger and larger over these critical public policy issues, even as the imperative to continue moving on them grew larger and more urgent.

When a split decision in last month's by-elections put a third McGuinty majority out of reach, the hand was largely played out. The only question left was whether Mr. McGuinty would draw for the next round in an early election, or take his winnings and losses (surely more of the former after nine years and three election wins), thank the innkeeper politely, and go home to his family.

So now the stage is set for the logjam to break up. The breathing space of prorogation will allow the Liberals to re-set with what should be a lively leadership race. With the party's membership locked at its current composition, the overwhelming emphasis will be on persuasion, rather than mobilization. This will put a premium on debate over the technological and fundraising imperatives that have come to dominate, and even cancel out, other leadership races. An ideas-rich contest amongst the Grits is a genuine possibility. Beneath the grey discipline of cabinet solidarity, there's been a vivid Liberal conversation waiting to happen about differing approaches to health care, university reform, GTA transit funding, and even green energy.

The PC Opposition has already begun heavying up its policy offering, with provocative interventions about health care and economic recovery. It seems evident that a much more serious effort is being made to present a comprehensive Conservative agenda for Ontarians to chew on.

As for the NDP, it is unlikely that the party would get away with another idea-lean campaign like their last one. Ontarians can expect a rich menu of policy choices to be put before them in the next campaign, which just got a good deal closer.

There are very good reasons for this outbreak of public policy decision-making. The province is facing a very different world from the one encountered by a wet-behind-the-ears McGuinty government in 2003. It is no longer Canada's growth leader. Its manufacturing economy has taken a major hit. New population and wealth has piled up in the burgeoning GTA, Kitchener-Waterloo and in Ottawa, while much of rural, Northern and industrial Ontario have fallen further behind.

Yet amid all this change, the Ontario government apparatus inherited by Mr. McGuinty upon taking power is still largely intact after almost a decade of Liberal government. Indeed, at times it seemed that this retention was the government's proudest achievement. No more. The long-delayed renovation of Canada's grande dame province passed the point of no return some time ago. With Mr. McGuinty's exit, the temporary parliamentary roadblocks to change have now been lifted. The pace of transformation is only going to accelerate from here, under a new premier to be sure, perhaps even a new party. There's no going back. Nine years ago, Dalton McGuinty swept to office on the slogan, "Choose Change". With his exit today, he has chosen it once again.

John Duffy is a Principal at StrategyCorp in Toronto. He is a former advisor to Prime Minister Paul Martin, and to several provincial Liberal campaigns. 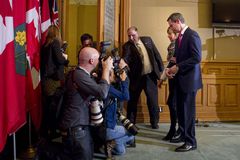 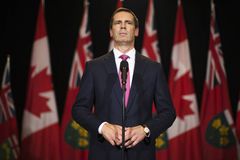