The best thing about being a retired politician is that you finally get to say what you really think.

The other day, Michael Ignatieff shared a few thoughts with the BBC about Quebec and Scotland, which is holding its own referendum on independence in 2014. He mused that the logic of devolving power eventually leads to independence. It was an interesting argument. But then all hell broke loose. The former Liberal leader (who's now paid to exercise his intellectual freedom at the University of Toronto) was roundly denounced. How dare he give aid and comfort to the separatists? Judging by the reaction, you'd think he'd defected to the Parti Québécois.

"There is no calling into question the Liberals' commitment to national unity," said Bob Rae, the interim Liberal leader. But Mr. Ignatieff hadn't done that. He'd expressed an opinion about the future of the federalist project. Worse, he'd told the truth.

Mr. Ignatieff told the BBC that the sense of national unity of his youth has given way to a sense that "we're almost two separate countries." The emotional bonds that once existed between French and English Canada are all but gone. "We don't have anything to say to each other any more," he said. "There's a kind of contract of mutual indifference, which is very striking for someone of my generation."

He's right. Our generation embraced the French fact with passion. It was what distinguished Canada from the rest of the world. The existence of Quebec – the language! the culture! – made us feel cosmopolitan and sexy. We adored the idea of bilingualism. We clamoured to do exchanges with students in Rivière-du-Loup. Later, we vowed to enroll our own kids in French immersion as proof of our commitment.

The separatist wars of the 1980s and 1990s were like a family feud, and emotions were intense. In 1995, three days before the referendum vote, 100,000 anglophones (give or take) showed up in Montreal to deliver a message: We love you! Don't leave!

But the marriage has grown cold. Quebeckers never did return our passion. And we've been exhausted by all that drama. We're now warily pragmatic – much too pragmatic to want a divorce because that would be messy and expensive. All we want is a quiet life. As Mr. Ignatieff told the BBC: "We've kept the show on the road by giving Quebec essentially mastery of its own house."

People still enroll their children in French immersion, but not out of patriotic pride. Parents see it as a form of streaming, and a way to enhance their children's brains. Mandarin would do just as well. Biculturalism has given way to "diversity" and, for cultural enrichment, kids go to Africa. More Americans now visit Quebec City than Canadians from English-speaking Canada. And Quebeckers are equally indifferent to us. A 2010 QMI poll found that 71.6 per cent of Canadians outside Quebec say they're very attached to Canada. Only 30.1 per cent of Quebeckers said so.

I have no idea if Quebec will eventually leave Canada, as Mr. Ignatieff surmised. What would be the point? In many ways, as he pointed out, it's already functionally independent. It's a weird arrangement, but it works well, for now. Even Stephen Harper called the Québécois a nation. And even though the separatists might form the next provincial government, separatist sentiment is at its lowest point in a generation.

Today's Canada is a decentralized federation whose current government believes in devolving even more power to the provinces. Mr. Ignatieff's advice to the U.K. is to do what we did – acknowledge Scotland's aspirations, and devolve power to keep them in. But that's not what got him into trouble. What got him into trouble was saying that all this devolution could eventually end in independence anyway. The heat was so great he was obliged to issue a statement affirming that his Canada does, indeed, include Quebec.

But it's a marriage of convenience. And if, God forbid, there ever is a next time, will 100,000 people rally in Quebec to show their love? I think not.

Ignatieff warns on Quebec but stresses his commitment to national unity
May 11, 2018
Ignatieff insists remarks on Quebec were taken out of context
May 9, 2018 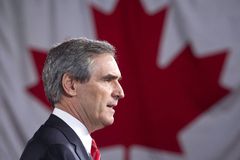