Here was the U.S. President before an adoring Tennessee crowd on Monday. "Oh, are you happy you voted for me? You are so lucky I gave you that privilege."

Donald Trump went on to Atlanta where before 70,000 spectators he Napoleonically marched to mid-field at the college football championship. For fear of being met with a hailstorm of derision, most political leaders are too timorous to do that. Not this one.

This came after Mr. Trump declared himself to be a "genius," thus fuelling the impression that he's a pompous ass. The genius claim was a response to the book Fire and Fury, which depicted him as a head case.

Next week, the President will have the gall to announce "fake news awards" for the country's media. Having himself dispensed a record-shattering number of falsehoods, fabrications and fake facts, it will be a gong show atop hypocrisy mountain.

Tearing down temples, shattering political norms, appalling the cognoscenti, Mr. Trump continues to do all this and he doesn't even blink – or drink.

He appears to realize that only those with a full deck oppose him – and that therefore he has a decent chance of re-election.

At the Alabama-Georgia football game, for instance, he drew mostly cheers, even though he had just been pilloried in national headlines as a result of Fire and Fury.

Written by journalist Michael Wolff, the reign-of-error book was supposed to bury this President once and for all by establishing that he's darn-near certifiable. But don't count on it. Mr. Trump is surviving the crackpot chronicles well enough. In fact, the book will do him less harm and more good. Already has.

Most importantly it is serving to unify a frayed Republican Party. It has led to the fall of party rebel Steve Bannon, who was running a campaign to torpedo the party establishment. Mr. Bannon has come crawling on his knees, begging forgiveness for his attacks on Donald Trump Jr. in the book, saying the quotes were intended for Paul Manafort. He's been disowned by the President. He is no longer a major source of disruption.

For the book, Mr. Bannon, Washington's leaker-in-chief, is the dominant source. In many sections, it reads like the Bannon monologues. It hardly helps the author's credibility, especially given the Trump Jr. foul-up.

A fear was that the book would build momentum for an invocation of the 25th Amendment, which allows for the President to be removed if he is deemed unfit to serve. But no Republican has come forward to back up Mr. Wolff's no-brainer Trump account. Party members have rallied behind the President. There is no chance the amendment will be pursued.

Mr. Trump, whose skin is tougher than an Aeroflot steak, is not one to crumble. He claims Ronald Reagan went through similar defamation with critics targeting the deficiencies of his mental equipment. Indeed, when he came to office, the rap on the Gipper was that he owned more horses than books. He was referred to in bar talk as "the amiable dunce." But he became a successful president.

In discrediting Fire and Fury, which is a slick and engaging read, the White House is being aided by its slew of errors. Mr. Wolff writes that Kellyanne Conway had little experience as a pollster. False. He writes that House Speaker Paul Ryan had little background on the health-care issue. Wrong again. He writes that Mr. Trump didn't know the identity of former House speaker John Boehner. Mr. Trump has golfed with the guy.

The author's depiction of White House dysfunction is accurate – but only up to a point. Much of the dysfunction ended last summer with the departure of Mr. Bannon and the arrival of John Kelly as chief of staff. The President's tweet storms give the impression of more madness than there actually is.

The book will predictably harden support for Mr. Trump among conservatives and stiffen opposition to him among progressives. Democrats are more roused than ever as result of this book, so much so that it has helped spur a movement for a presidential run by Oprah Winfrey. Her celebrity equals that of The Donald's and her political experience, zero, would also be the equivalent of his when he came to power.

Ms. Winfrey is also compassionate, informed and rational, all qualities which in this day and age could make her candidacy less viable.

Opinion
Oprah deserves praise, but should she be president?
January 8, 2018 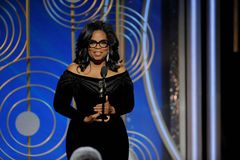