Last week, the Internet pulsed with dismay about the misunderstandings expressed by Stephen Harper, Justin Trudeau, Thomas Mulcair and Elizabeth May on the constitutional rules about government formation in Canada. There would have been fewer exasperated online alarms had each of the federal party leaders wondered whether Spock would appear in the next Star Wars film.

What exactly did they say to churn the stomachs of so many constitutional lawyers and political scientists? In interviews with the CBC's Peter Mansbridge, each leader appeared uncertain about the precise constitutional conventions that govern a minority Parliament. The constitutional gaffes from our political leaders appear embarrassing, perhaps even dangerous, in a country so heavily reliant on unwritten constitutional principles. Are we in trouble when our leaders don't seem to know the rules of our constitutional democracy?

Let's begin with the confusion. Conservative Leader Mr. Harper declared with confidence that "you have to have the most seats in Parliament to go to the Governor-General [to form government]." NDP Leader Mr. Mulcair was less direct, but seemed to agree with the assertion that the party with the most seats has "the automatic right to govern," although he noted that the matter was "complex."

Liberal Leader Mr. Trudeau also endorsed the fallacy that "whoever commands the most seats gets the first shot at governing." Ms. May, leader of the Green Party, announced a plan to call the Governor-General on election night to ask for time for the opposition parties to organize themselves into a potential government.

While each of these positions is constitutionally suspect to varying degrees, it is important to remember that party leaders approach government formation not as scholars, but as politicians hoping to secure an electoral advantage, especially in the context of a too-close-to-call election campaign.

Mr. Harper proposes that seat count bestows the right to govern in an attempt to pre-emptively discredit the possibility of political co-operation among opposition parties (recall that he did so to great political effect during the prorogation episode in 2009).

Mr. Mulcair and Mr. Trudeau, each campaigning to win and fed by mutual distrust (and probably by internal polling data), have surmised that there is little to gain from advance talk of coalitions and co-operation. They are prepared to first see where the electoral chips fall.

Ms. May, meanwhile, is keen to play the role of matchmaker and power broker.

Even if these were not calculated positions of political gain, but genuine misunderstandings of our constitutional rules, party leaders are players – not referees – in the game.

By constitutional convention, the authority to govern is determined not by the number of seats a party wins, but by decisions of the Governor-General. His decisions are constitutionally constrained by the principles of responsible government and historic practice, which keep our system democratic, accountable and rooted to venerable parliamentary traditions, no matter what obfuscations or convenient positions politicians take during political battle.

In exercising his powers, the Governor-General takes his advice from the Prime Minister (not opposition politicians with his phone number), although he always retains the discretion to refuse advice from a prime minister who has lost the confidence of the House of Commons, or, in rare and extreme cases, when that advice will significantly damage the constitutional interests of Canada.

Until Mr. Harper resigns or is dismissed by Governor-General David Johnston, he remains Prime Minister. Mr. Harper can decide to meet the newly elected House (no matter how many seats his party wins) to see whether he can maintain its confidence; or he can advise the Governor-General that he intends to resign immediately.

You do not need to dip very deeply into our history to find examples of representatives of the Crown exercising their constitutional discretion. In 1985, Ontario's lieutenant-governor asked Liberal David Peterson to become premier with support in the legislature from Bob Rae's New Democrats – even though each of those parties had won fewer seats than the Conservatives in the election.

In her memoir, former governor-general Adrienne Clarkson said she would have refused Prime Minister Paul Martin's request for the dissolution of Parliament in 2004 had his minority government fallen within the first six months.

After leaving office, former governor-general Michaëlle Jean confirmed that she granted Mr. Harper's request for prorogation in 2009 only after deliberate reflection; in other words, she had a choice to make. Each episode proved an exercise of responsible government at work, while affirming the reserve powers of the Crown in Canadian constitutional governance.

Mr. Johnston may face similar constitutional choices over the next several months. He is well equipped to handle them. As a former law professor and dean of law, he is intimately acquainted with the interpretation of legal texts and precedent.

Moreover, as have governors-general before him, he will have independent and impartial constitutional experts to consult as required. In reaching conclusions and making choices, he will be guided not by personal whim, political preferences or muddled politicking, but rather by a much lengthier and sturdier set of constitutional traditions and conventions that span the Commonwealth.

For good reason, the Governor-General does not enter the political fray, and certainly he was not about to partake in any of the recent debates about who misunderstood which convention when. But still, I like to imagine his response: Don't worry, the Constitution endures.

Opinion
When the votes are in, ball may be in the Governor-General’s court
September 14, 2015 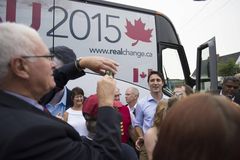