The story of James Robertson, a Detroit factory worker who walks 21 miles five days a week to get to his job, has ricocheted around the world. There is something about Mr. Robertson's tale of fortitude – his lack of sleep, his perfect attendance record, his Mountain Dew-fuelled feats of endurance – that has touched a chord. There is nothing like a tale of individual grit and determination to get people's attention.

After reading about Mr. Robertson's story in the Detroit Free Press last week, a college student named Evan Leedy started a GoFundMe campaign to buy a car for the factory worker, who'd been without wheels for a decade. The campaign has raised more than $300,000, and a local dealership is giving Mr. Robertson a new Ford Taurus.

He will now be able to drive to work, but the larger issue – Detroit's broken transit system – will remain a shambles. Mr. Robertson, a man betrayed by that broken system for years, knows this. "This city needs buses going 24/7," he told the Detroit Free Press. "You can tell the city council and mayor I said that."

Now, every day, he'll drive past all the people waiting for buses – people whose urban struggle was not quite compelling enough for a GoFundMe campaign. This is the problem with the wildly popular new online world of what you might call misery fundraising: It semi-solves one small problem while leaving the system in ruins. Crowdfunding someone's personal tragedy is the equivalent of fixing a broken arm, but closing the hospital.

It used to be that crowdfunding sites like Indiegogo and Kickstarter were wonderful places to raise money for cultural projects – movies, plays, even the occasional potato-salad recipe. When the Morgentaler clinic in Fredericton was forced to close, it was able to raise enough money to reopen thanks to an online fundraising campaign. But lately, as the social safety net frays, the needy and desperate have turned to websites such as HandUp, GoFundMe and YouCaring to meet their basic needs. Needs that would have been met, even a couple of decades ago, by community or government services.

Take a look at some of the tales of woe on these sites, each one more miserable than the last: People who can't afford rent, or shoes, or medical care. People who need bus money to get to work, or wheelchair vans, or help with tuition. Sometimes they're looking to build memorials to lost children. These are not people looking for a week in Tahiti. And while it's lovely to see the great generosity of donors, it's also enraging to think that there are a vast number of people who have had to resort, in essence, to online begging. What should be the work of society is fobbed off onto goodhearted individuals with tablets.

It also means that those who are not particularly technologically savvy, or whose stories don't get picked up on the nightly news, end up lost in the waves of misery – which is further demoralizing for them. This is what happened to Phyllis John, a survivor of domestic abuse who I wrote about in December of last year. Ms. John was having trouble making rent, and supporting her two teenaged sons, so her friend set up a GoFundMe account.

The $750 raised was a mixed blessing – while she was thrilled with strangers' generosity, the money also cut into her social assistance payment since it was considered income. Ms. John wonders if the sheer number of woeful stories isn't turning potential donors away: "There's such a high volume of really great causes, I think some of them are being overlooked," she told me when I talked to her this week.

On top of that, she worries, as I do, that online fundraising is a haphazard way of looking after those who need help the most: "It's definitely a way of shifting responsibility away from governments."

In this topsy-turvy world, extending a hand for help is a gamble: Some win, but many more lose, if they aren't lucky enough to have a story like James Robertson's, which stirs hearts and opens wallets.

Thousands of dollars raised for Detroit man who walks 34 kilometres to and from work
May 12, 2018 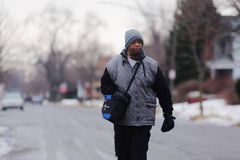 Opinion
Mockingbird’s sequel is a golden egg for a desperate publishing industry
May 12, 2018

Opinion
With the target blurry in our sights, we fight terror with politics
May 12, 2018