I remember being impressed, as a boy, by a comic book cover that showed Superman ripping open a tunnel filled with crooks and their loot. For a while, I thought that was the real meaning of the phrase "criminal underground."

It was easy to be misled by photos of caves found recently under Montreal's St. Leonard district, some of which looked like man-made stone corridors. In fact, they were created by glacial tectonic movements, some 15,000 years ago.

If the caves had been found under a farmer's field, no one but spelunkers would have cared. Because these are under a city, we all want to know when we can go down and have a look – or better yet, paddle a dinghy through the watery sections of the 500 metres opened up by a pair of Montreal cave enthusiasts.

What is it about urban caverns that is so attractive and mysterious? Few people want to live or work below ground. Montrealers get plenty of subterranean experience by walking the Underground City – the 32 kilometres of tunnels and passageways that link downtown office towers and shopping malls with the city's subway system.

La ville souterraine, of course, is part of the "known" urban world, in which everything is planned, designed, built and managed for specific purposes. The newly discovered caves are accidents of geology, coming to light unexpectedly in a milieu where most natural features of the land have already been mapped, controlled and regulated.

The resemblance of some sections of the caves to a built environment, seen in photos of straight limestone walls and ceilings, is a bonus. It's as if nature had constructed a useless parody of what our purposeful architecture would eventually look like, and then waited several thousand years for us to discover the joke.

The public curiosity about this new-found feature of subterranean Montreal is especially striking when you consider the combination of indifference and activist engineering that drove many small rivers and streams underground. Part of the story of Montreal is its long assault on the natural waterways that flowed through the land when the city was founded.

One portion of the original city wall followed the meandering St. Pierre River, at the point where it approached the St. Lawrence from the west. The St. Pierre was considered an asset to settlement, just as it had served Indigenous people for millennia.

Within a few generations, however, the minor rivers of Montreal were known not for fresh running water but for filth. They became the dumping places for wastes of every kind, pitched in by the city's growing population and industries. Rather than clean up the mess, Victorian engineers buried it, channelling the waters and their noxious odours into conduits made of stone or brick.

By the 1930s, one-third of Montreal's tributary system had gone underground; by the 1960s, the whole thing was being subsumed into a more systematic waste-water system. As photographer and underground explorer Andrew Emond notes in his fascinating web pages devoted to the St. Pierre, only about 200 metres of the river still run above ground as the water hazard on a golf course. Many Montrealers have no idea that hidden rivers flow beneath their feet.

Burying the waterways was supposed to be a public health measure. The same imperative has come around in a different way in cities where hidden streams have been found, not surprisingly, to be highly polluted. Some of these rivers are being revived and restored. The bigger challenge will be to root out the exploitative, short-term view of the environment that allowed natural waterways to be seen as disposable tools for city-building.

Montreal's new ancient caves, which adjoin caves known since the early 1800s, may become part of the city's tourism infrastructure, or not. Paris has about 300 kilometres of underground tunnels, dug out by medieval stone miners. That's almost 50 per cent more extensive than the city's subway system, but only a small portion can be visited: the catacombs, where the big draw is the exposed bones and skulls of long-dead Parisians. Caves are notoriously resistant to the amenities needed for large-scale tourism.

The last resting place for the mouth of the St. Pierre River is actually in a museum. The Pointe-à-Callière history and archeology museum was built right over a section of brick-and-stone sewer conduit from the 1830s, which till 1989 channelled a portion of the river into the St. Lawrence.

Last spring, the museum opened a permanent exhibition of 110 metres of this "collector" sewer system, the first in North America, under the title "Memory Collector." It's an odd choice of title, given the civic oblivion into which the sewers cast the streams they gathered. 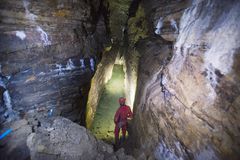