Forget APEC and the G20. Forget the climate-change summit. If you belong to the global elite, the only place that really counts is Davos – the yearly schmoozefest where central bankers and celebrities meet to network and exchange Big Thoughts. Where else can you party with both George Soros and Leonardo DiCaprio? When they invite you to Davos, you know you've arrived.

Prime Minister Justin Trudeau has arrived. This year he shared top billing with Mr. DiCaprio, the activist actor who has been nominated for an Oscar for being mauled by a bear. Everybody wants to get a load of the hottest star in politics. Besides, they need a break from the relentless doom and gloom.

The Davos crowd is in a funk. The ground is giving way beneath their feet. Their house sage, New York Timesman Thomas Friedman, is worrying about the end of everything. "Seismic shifts in the foundational pillars of the global system" could rock our world, he wrote this week. What if dirt-cheap oil is here to stay? What if weak states keep imploding? What if the EU era is over? What if the centre of U.S. politics collapses? What if the age of economic growth has come to an end? What if robots take all the low-skilled jobs?

It's enough to make you reach for another glass of Crémant.

But Justin is a veritable ray of sunshine. He tells Davos that Canada knows the way ahead. No longer are we lumberjacks and rig hands. What matters is not what lies beneath our feet but what lies between our ears. (Good line. Did Gerry Butts come up with that?) The surprisingly subdued audience – perhaps exhausted after the opening festivities the night before – applauds politely. His speech is all about diversity and positivity and confidence. The world should invest in Canada, because we're going to create new companies, new growth and new prosperity.

Somewhere there must be a Trudeau speech generator. It is programmed to ensure that every other word he says is "diversity," "positivity," "optimism," "inclusive," "confidence," "resilience," "innovation" or "clean growth." This is in contrast with the "negativity" and "division" of the past. The aim is to refresh the Canada brand. Let's hope it goes better than New Coke.

Back here in the land of $8 cauliflower, things don't seem quite so upbeat. It seems unlikely that Google will create as many jobs as the energy industry has lost. A postenergy economy sounds just dandy. Meanwhile, as Calgary Mayor Naheed Nenshi said pointedly the other day, it's past time to get another pipeline built, and what's the plan for that?

Mr. Trudeau and his heroes (the late Maurice Strong as one) are the perfect Davos Men – dedicated to improving the state of the world with smart ideas and dynamic leaders who have vision. It's important to understand that Davos Men (who now include a smattering of women) are not just greedy fat-cat plutocrats. They're plutocrats with a social conscience. Some are megaphilanthropists, such as Bill Gates. At Davos they rub shoulders not only with each other but with social entrepreneurs (Canada's Kielburger brothers), intellectual celebrities (Fareed Zakaria), celebrity do-gooders (Bono). Mark Carney (governor of the Bank of England) and Dominic Barton (Canadian CEO of McKinsey & Co.) are there, too. The tone of Davos is politically progressive.

But Davos Men aren't like the rest of us. As Chrystia Freeland so memorably wrote in a famous 2011 piece in The Atlantic, they live increasingly in a world apart, "a transglobal community of peers who have more in common with" each other than with the folks back home. They live in gated communities and send their kids to private school. "The real community life of the 21st-century plutocracy occurs on the international conference circuit," she wrote.

Ms. Freeland leveraged her Davos contacts into a high-profile 2012 book (Plutocrats) and a political career. As Canada's newly minted International Trade Minister, she's back at Davos – not as an observer this time, but as a player.

The gathering at the Swiss ski resort is as close as you can get to a pure meritocracy. All the people at Davos are the smartest people in the room. Like Mr. Trudeau, they are forward-looking and postnational. They believe that nationalist sentiment is a defect of the bitter clingers, who don't understand that diversity (despite Cologne) is good for them. Unlike the bitter clingers, they are personally untouched by the seismic shifts underfoot. They're on the winning side of change. Every year their lives get better and better.

But now, the bitter clingers are rising up, pitchforks at the ready. They are rallying behind Donald Trump – Trump! – in a massive rejection of every value a Davos Man holds dear. They're convinced the elites have failed them. They blame the elites for the disruptions of globalization and technology that have stolen their jobs and their children's futures.

They will never work at Google. And they're mad as hell. They've lost all trust in the business and political and intellectual and celebrity class, jetting to their conferences 60,000 feet in the air. That includes the folks in Davos – the smartest people in the world, with no idea what to do. 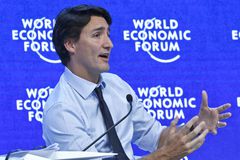 Opinion
Climate-change consensus is reached everywhere except in Washington
January 23, 2015