In his latest effort to rebrand Canada on the world stage, Justin Trudeau is scheduled to give a major speech at the United Nations today. Alas, his timing isn't very good. New Yorkers are still transfixed by the weekend's bombings, which triggered a massive hunt for terrorists on the loose. The citizens are jumpy. They know that every backpack and every dumpster could contain another explosive. But they're New Yorkers, after all. They'll keep calm and carry on.

Mr. Trudeau isn't very comfortable with the darker, more unpleasant side of life. His specialty is sunny ways. Here's a preview of what he's supposed to say in his debut speech to the UN General Assembly: Prosperity leads to peace. Canada is prosperous and is determined to invest in peace. We love refugees, and everybody else should love them, too. If only the whole world were more like us! By the way, you can forget about those nasty politicians who called the UN a soapbox for dictators. They're out of power now. Canada believes in the UN again, so please, please, vote for us to get that seat on the Security Council in 2021.

This message will be welcomed throughout Canada, especially at the CBC. The message massages our self-regard. It reminds us that we are both good and influential, and reassures us that there is still a place for soft power in a hard world. Although with Syria a charnel house, Putin threatening the Baltics, China rattling its sabres, North Korea bristling with nukes, Iran gunning for a standoff in the Persian Gulf, bombs going off in New York and a crackpot running for U.S. president, it's getting difficult to see where that place might be.

Opinion: Trudeau is the unproven champion of the centre-left

Mr. Trudeau thinks that place might be Mali, which is rumoured to be on the shortlist for our next "peacekeeping" mission. Can you find Mali on the map? I thought not. Mali is a vast and lawless chunk of Africa that's overrun by jihadists, bandit gangs and anti-government militias. It's one of those places where good intentions go to die. The UN has already sent in more than 12,000 troops from 48 countries, many of whom are badly disciplined and poorly trained. Some are themselves accused of human rights abuses. So far, peace is not in sight. But we can't expect to sit at the big boys' table unless we pay our way in.

Anthony Banbury, a former highly placed UN official, says that in Mali, "More than 80 per cent of the [UN forces'] resources are spent on logistics and self-protection" – not a very good investment, it seems. It has been named the most dangerous UN mission in the world; more than 100 UN troops have been killed there. "The United Nations in Mali is day by day marching deeper into its first quagmire," warned Mr. Banbury in The New York Times.

The chaos that is Mali would test the ideals of even the most ardent liberal interventionist. Other possibilities on our peacekeeping list – or "peacemaking," as it has been rebranded – are Congo and the Central African Republic. They're about as promising as Mali. But the Trudeau Liberals are desperate for that Security Council seat, which in their eyes confers a mystical prestige. By their account, the feckless Harper government blew it by not stroking the right people and being too nice to Israel. Whether plunging our troops into a no-win situation in a far-off land makes sense to get a Security Council seat is anybody's guess. If you think Canada's international credibility is at stake, then maybe yes. If you think it's basically a vanity project for the Liberals, then maybe no.

People's naive belief in the sanctity of the UN has always been a mystery to me. Although some of its agencies do good, important work, the institution itself, as Mr. Banbury wrote, is a colossal failure – a bloated bureaucracy that is plagued by gross mismanagement and seems impervious to reform. The Security Council is an outmoded body whose three biggest permanent members – the United States, China and Russia – don't get along. The temporary members, as Canada aspires to be, barely count.

But forget about that. The one thing at which the United Nations excels is grand pronouncements. It's a terrific place for world leaders to show up and hold gigantic talkfests. If they can't stop the terrorists, at least they can vow to do more for the world's 62 million displaced people, and sign important treaties that pledge to tackle climate change. Nothing will happen, but everyone will feel good. That's why Mr. Trudeau loves the UN, and the UN loves him back. 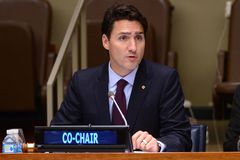 At UN General Assembly, Trudeau must try to move past Harper years
May 17, 2018 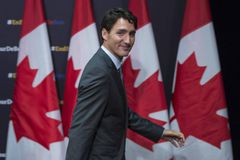 A Canadian peacekeeping mission in Mali could be most dangerous choice
May 17, 2018 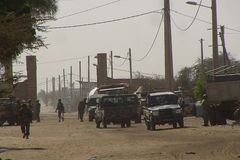