Farida Deif is the Canada director at Human Rights Watch.

Canada has reacted with strong words and generous humanitarian assistance to the victims of the ethnic cleansing campaign by Myanmar's security forces against Rohingya Muslims. More than 650,000 Rohingya have been forced since August to flee northern Rakhine State to neighbouring Bangladesh, where they are struggling to survive.

Yet the Trudeau government appears to be in a holding pattern in its response to the Rohingya crisis, unwilling to support concrete action to ensure that those responsible are held accountable for their crimes. In a series of increasingly strong statements, Global Affairs Canada has condemned these unconscionable crimes, but words are not enough to bring justice to the victims or to deter future crimes against humanity. Canada has committed more than $50-million for Rohingya refugees, but relief aid is no substitute for measures to advance accountability and put pressure on the military to stop its abuses.

On the ground, it appears to be business as usual. According to the embassy's Facebook page, Canada's ambassador to Myanmar, Karen MacArthur, took part in a discussion in November on "Diversity Management in the Age of Globalization" at a symposium attended by 120 government officials. It's hard to overstate the irony here at a time that the Myanmar authorities are engaging in ethnic cleansing to ensure that there is no diversity to manage as they try to rid the country of Rohingya. Last month, at an event on gender-based violence, the embassy "showcased activities from 2017 that support women's empowerment and leadership in Myanmar."

At any other time, these would be benign official events that Canadian diplomats take part in around the world. But these aren't normal times. As Human Rights Watch and others have documented, Myanmar security forces committed widespread rape against women and girls as part of their campaign of ethnic cleansing. Surely an event highlighting gender-based violence should focus on these horrific attacks?

To add insult to injury, in early January, Ms. MacArthur's spouse, Peter MacArthur, Canada's ambassador to Indonesia, tweeted a photo of a beach in Myanmar. Global Affairs confirmed that he spent the New Year vacationing in southern Rakhine State with their children, but that the ambassador herself did not take part in this trip. Regardless, if taking a beach holiday in Rakhine State as a Canadian ambassador and the spouse of Canada's top diplomat to the country while crimes against humanity are taking place at your doorstep doesn't send the message that it is "business as usual," it is difficult to imagine what would.

In October, Canada took a positive step in response to the crisis by appointing a special envoy on Myanmar, Bob Rae. Two months later he delivered an interim report following a visit to Bangladesh and Myanmar. To his credit, he asked for, but was denied, access to Rakhine State. But the Trudeau government should not wait for Mr. Rae's final report to respond to the severity and scope of the military's atrocities.

It would be a mistake for Canada to pull its punches now in the hopes that Mr. Rae will be granted free and unfettered access to Rakhine State. For the Rae appointment to be meaningful, it should be the catalyst for a strong and unequivocal response by the Canadian government, not a time-wasting exercise of dead-end diplomacy with Aung San Suu Kyi and her government.

Foreign Minister Chrystia Freeland should without delay impose targeted economic sanctions on Myanmar military leaders involved in the Rohingya campaign, including travel bans and restrictions on access to financial institutions, and on key military-owned enterprises. Given the systemic nature of the crimes against the Rohingya people, it is important that sanctions target senior officials who likely ordered criminal acts or appear to be criminally responsible as a matter of command responsibility.

Canada should also send a clear message that it stands ready to take additional steps to ensure justice, including through the International Criminal Court. The government should oppose any efforts by Bangladesh and Myanmar to repatriate Rohingya refugees at this time, given the lack of protection for returnees, the absence of engagement with the UN refugee agency, and the possibility of new internment-like camps across northern Rakhine State.

The Canadian government shouldn't be cautious as evidence of continuing attacks on the Rohingya community comes to light. Instead, it should lead an international consensus on justice and accountability for one of the world's most persecuted peoples. 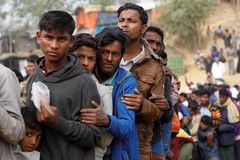