Is your family doctor a wealthy tax cheat?

I don't think mine is. She strikes me as a dedicated, overworked person who is by no means overpaid. But Bill Morneau, our federal Finance Minister, is here to set you straight.

His new proposals for small-business tax reform – which will hit a wide range of professionals – are couched in the rhetoric of class warfare. He refers to law-abiding, tax-compliant people (not all of whom drive Lexuses) as "the richest Canadians," who exploit "unfair tax advantages" and "fancy accounting schemes." In contrast with the middle class families that the Trudeau government is working day and night for, they don't pay their "fair share."

A lot of media like this story line. "Feds propose changes to close tax loopholes for wealthy," said one obliging headline.

My dentist (Jack Slome, known him for 30 years, great guy) sees it differently. "It's extremely dramatic and very devastating," he says. "Everybody thinks I can take what I want from my company, but it doesn't work that way."

The Finance Department released its new proposals in the dead of summer, July 18. They are massive. "It will be very profound, and it will affect almost every profitable private business in Canada," Greg Wiebe, the managing partner in KPMG's tax division, told The Globe and Mail. "Tax Planning Bomb Shell," one prominent tax lawyer announced on his website.

Calgary tax lawyer Kim Moody calls the proposals "the most pervasive and complex policy changes in the last 50 years." Yet the consultation period is just 75 days, ending in early October. Skeptics believe the government isn't really interested in consulting at all. Mr. Morneau has affirmed that impression with a series of populist tweets. "When the rules meant to help businesses grow, are being used for personal gain – we all lose," said one.

In other words, the government is using the words "tax loopholes" to describe the existing law.

Doctors, especially, have good reason to be angry. For years, Ontario and other provincial governments have been vigorously encouraging them to incorporate, even giving them tax tips on how to use the rules to their advantage. Incorporation was sold as a trade-off for forgone fee increases. And now the feds have yanked the rug out. Younger, lower-income doctors who are burdened with giant student loans will be particularly hard hit.

What's unfair here is not the "loopholes" in the system – it's the federal government's abrupt plan to claw back benefits that doctors understood to be a legitimate part of their compensation.

Incorporation allows doctors and other professionals to accumulate retirement savings, and to "sprinkle" income by employing other family members. Unlike salaried employees, they get no vacation, sick time or retirement benefits. It also allows them to save up capital to reinvest in their business. No doubt some of them are tax cheats. But most are not.

Whether they should be taxed differently from salaried employees is a subject of legitimate debate. What's not in doubt is that the number of incorporated companies has soared in recent years. This is partly because provincial governments have encouraged it and partly because personal income-tax rates are now so high that the benefits of incorporation are irresistible. The top marginal personal-tax rate is now above 50 per cent in most provinces, while the small-business-tax rate is about a third of that.

As for whether all this is good for the middle class – that's debatable, too. Plenty of these folks think they're the middle class. And they're right. Many critics believe the changes will discourage entrepreneurial activity.

What's not in doubt is that people are mad as hornets. "The more they find out, the angrier they get," Mr. Moody says. MPs – many of them Liberal – are being besieged by enraged constituents, and a new alliance of business groups and professionals has been formed to fight the changes.

The government is hoping that the furor will quickly pass and that the public will dismiss the howls of anguish as just more griping from the small-business lobby. The trouble is that plenty of the afflicted are good Liberals and party donors. They aren't likely to sit down and shut up.

"It's very discouraging," my dentist says. "We've worked hard for what we've got. Now basically they're saying, 'You've got too much money and we're going to take it away from you.'" 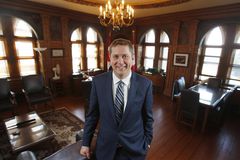