What's really good is when presidents (like Donald Trump maybe?) or members of the White House staff keep secret recordings. It allows, like nothing else, the truth to emerge.

We in Canada know something about that. We found out what Richard Nixon really thought of Pierre Trudeau when the Nixon tapes were released.

Now there is more on this story courtesy of a tape from Nixon chief of staff H.R. (Bob) Haldeman that has been unearthed in the Nixon presidential library. Mr. Haldeman is speaking into his dictaphone on Dec. 6, 1971. It is following a state dinner for Mr. Trudeau, one at which Mr. Nixon spoke glowingly of our prime minister.

Explainer: Who is Robert Mueller, and what will he do? A primer on the Trump-Russia probe's new player

But here's Mr. Haldeman on what Mr. Nixon really thought. "He was thoroughly disgusted with Trudeau who he hasn't liked much anyway but who has turned into even more of a fag than he was before."

"It's considerably more obvious," Mr. Haldeman continued. "His hairdo and attitudes and everything else are really repulsive."

Arthur Milnes, a specialist on Canada-U.S. relations, located the recording. Pierre Trudeau wore his hair long in those days, which was a tad more fashionable than the Haldeman look. Mr. Haldeman had the brush-cut style that was popular in bowling alleys in the 1950s.

Mr. Haldeman's capsule commentary on the day betrayed the hypocrisy often on display at state dinners and the like. Mr. Nixon, as we recall, was revealed on his tapes to have called Mr. Trudeau several uncomplimentary names though, as Mr. Milnes notes, the two men managed their relations well despite robust personality differences.

Mr. Trump has insinuated that, like Mr. Nixon and many other presidents before him, he has been secretly taping interlocutors. He threatened the former FBI director last week, saying in a tweet, "James Comey better hope there are no 'tapes' of our conversations before he starts leaking to the press."

Leaking to the press? Mr. Comey, we find out, has been keeping notes of his conversations with the President and some of the contents have wound up in the hands of the media. According to one such note, the President asks Mr. Comey to drop his investigation into former national security adviser Michael Flynn concerning possible Russian interference in the election campaign: "I hope you can let this go."

The White House – surprise! surprise! – denies this. Some support for its claim comes from acting FBI director Andrew McCabe who has testified there has been "no effort to impede the investigation."

But the best way for Mr. Trump to back up the denial would be for him to release the tapes, if he did indeed keep them, of his Comey conversations.

It may, in fact, be the only way to prevent the onset of an obstruction of justice investigation against him and the threat of possible impeachment. Of course, Mr. Trump, knowing what is on the tapes, may not want them divulged. And if he fights their release, it's a dead giveaway of his guilt. What a fix to be in.

But first of all, someone has to come forward to say the recordings exist. In Watergate, it was the revelation of the existence of the tapes that led to Mr. Nixon's doom.

Washington is reeling. The revelation on Mr. Comey's notes followed the disclosure that Mr. Trump shared sensitive classified information in White House meetings with Russian officials. That only added to the suspicions surrounding alleged subterfuge in respect to relations between Russia and Trump officials, or all the President's mice as someone called them.

What the week has established, for those who didn't know it already, is that the country is being run by a rank amateur. In requesting Mr. Comey to go easy on Mr. Flynn, Mr. Trump, according to the Comey notes, used the defence that "he is a good guy." The coup de grâce, no doubt.

The same President said one of the reasons he didn't terminate NAFTA was because Prime Minister Justin Trudeau and the Mexican leader were good guys who had rung him up. Nice chats ensued. No NAFTA termination necessary.

Mr. Trump thought James Comey was a good guy for a while. But all that's changed. Mr. Comey is the one who could bring him down. 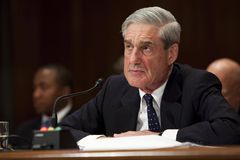 Explainer: Was Trump's request to Comey an obstruction of justice?
May 17, 2017
Trump engulfed by new crisis over sharing classified information
May 16, 2017
Follow us on Twitter @globedebate Opens in a new window
Report an error Editorial code of conduct
Due to technical reasons, we have temporarily removed commenting from our articles. We hope to have this fixed soon. Thank you for your patience. If you are looking to give feedback on our new site, please send it along to feedback@globeandmail.com. If you want to write a letter to the editor, please forward to letters@globeandmail.com.
Comments