When the young Ted Williams was growing up in Depression-era San Diego he had one goal: He wanted to be so surpassing a baseball player that, he said, "When I walk down the street folks will say, 'There goes the greatest hitter that ever lived.' " More than a dozen years after his death, that's still debatable. Was he greater than Joe DiMaggio? Willie Mays? Ty Cobb? Honus Wagner?

But when Muhammad Ali, who died Friday, proclaimed himself The Greatest, nobody, then or now, questioned his claim. As a boxer, as a pioneer, as the philosopher-king of boxing, as both halves of the antiquarian phrase sometimes employed to describe boxing – the gentleman's sport – Muhammad Ali had no peer.

Mr. Ali – a fighter who refused to fight his country's Vietnam War, a man who famously embraced the characteristics of both the butterfly and the bee, a civil-rights activist who became a role model of civility, the ultimate man of pugilistic fitness reduced to Parkinson's frailty – was in many ways the personification of the highly competitive, highly complex and highly contradictory country he represented in the 1960 Olympics in Rome.

From gold medalist to gold-plated celebrity, Mr. Ali was perhaps the archetypal American of his time, a great irony given his outsider status (reared in Louisville racial segregation); his fight for attention and for fame (beginning with his remarkable upset against Sonny Liston in 1964); his instinct for the great risk (none more significant than refusing induction for the draft in 1967, earning the enmity of Lyndon Johnson and leading veterans' groups); and his gift for reconciliation and redemption (as a goodwill ambassador around the globe).

Indeed, so devoutly and profoundly American was Mr. Ali that in one body and one life his most distinctive characteristics include the most distinctive characteristics of the choice his compatriots face in November–the accumulation of experience and accomplishment (Hillary Rodham Clinton) and the boast (Donald J. Trump). And to leaven out that combination, which so unsettles most Americans, let us remember the remark attributed variously to the baseball pitcher Dizzy Dean and the humorist Will Rogers, themselves quintessentially American figures: It ain't bragging if you can do it. For Mr. Ali could do it. But mostly he was a transition figure who had his own transitions, and who in the process prompted great transitions in others.

In going from Cassius Marcellus Clay Jr. to Muhammad Ali; from his rearing as a Baptist to his conversion to the Nation of Islam; from the brash braggart to the role of UN Messenger of Peace; from the rebel without a cause to the rebel with a generation's cause; from the insurrectionist in the Vietnam years to the Tournament of Roses parade figure celebrating the bicentenary of the American Constitution, Mr. Ali changed with the times even as he changed the times. The man of repeated transformations transformed his own country and the world.

Black athletes have often been American crossover figures; Jesse Owens did it in 1936 when he defied Nazi race orthodoxies to win four gold medals in the Berlin Olympics, and he was followed by Jackie Robinson (with a tryout run in Montreal), Bob Gibson (the St. Louis Cardinals pitcher whose 1.12 earned-run average in 1968 remains a breathtaking achievement), and Earvin "Magic" Johnson (with one NCAA basketball championship, one Olympic gold medal and five NBA crowns).

But Mr. Ali was in a world apart, world-class before the phrase became a cloying cliché, so remarkable and so indelible a figure that the use of the words "fighter" and "humanitarian" never seemed mutually exclusive when applied to him. And while the appeal that the brutal sport of boxing held for writers, many of them typing in don't-hit-a-man-in-spectacles eyeglasses – and here the names Paul Gallico, Pete Hamill, A.J. Liebling, Joyce Carol Oates come to mind – often seemed incongruous, even forced, it seemed perfectly appropriate that Mr. Ali's life was chronicled by Norman Mailer, Gay Talese, Thomas Wolfe and New Yorker editor David Remnick. American presidents from Lyndon Johnson to George W. Bush have yet to attract so broad and so gifted an assemblage of celebrators.

The celebrations of Mr. Ali's life will continue for days, and there will be much talk of knockouts, of Joe Frazier, of a legal appeal that reached the Supreme Court of the United States, and of the inescapable fact that the man named for a 19th century abolitionist was himself a liberator, not to mention the heavyweight champion of the world. But in all that, remember this: In the causes that made the world weary, Muhammad Ali was both a champion and a heavyweight. And, as Ted Williams would have had it, the greatest hitter that ever lived. 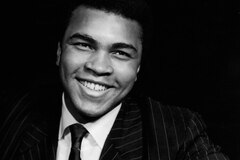 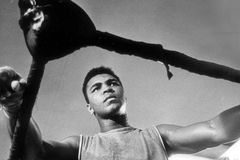 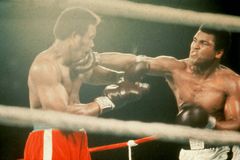