On Friday night, the Toronto event to be at is an intellectual sparring match on religion. "Be it resolved, religion is a force for good in the world," was the fastest selling show in the history of Roy Thomson Hall, said organizers of the Munk Debate. Surely, a sign that religion is far from dead in the public imagination.

Former British prime minister Tony Blair and author Christopher Hitchens will showcase their powers of persuasion by arguing their views on a subject that has the power to ignite wars, honour killings, genocide, altruism, compassion and new beginnings.

Mr. Hitchens, on the con side of the debate, is probably the world's most famous atheist and campaigner to rid the world of religion. His wit and criticisms circulate in media and as a visiting professor at various universities. His stellar rhetoric is increasing in emotional appeal since his diagnosis with esophageal cancer. He will be, as Mr. Blair has stated, "a formidable opponent."

Arguing for religion, Mr. Blair, a Christian, created a faith foundation to show that religion is a powerful force for good in the world, and to promote respect and understanding for it. He circulates his ideas through academic programs and by assisting religious leaders in working on the United Nations Millennium Development Goals.

As a recently converted Catholic, with an even more recently converted Muslim sister-in-law, Mr. Blair has family dynamics to juggle. Mr. Hitchens is in a similar boat - his only brother Peter writes compelling prose about his own conversion from atheism to Christianity.

I'm of the opinion that Mr. Hitchens has made an impressive career of ignoring witness accounts, because as historians will attest, this is what the teachings of Jesus are - accounts at the root of why so many believe God is real. It is hubris to say that simply because people recorded their view of a debate with Jesus and religious scholars some 2,000 years ago, those facts are less valid than those that will be recorded at a debate on Friday night at Roy Thomson Hall. It is source material, however old or new, recorded by witnesses, that will always have credibility in discerning religious truth.

Mr. Blair and Mr. Hitchens will push each other to explain accounts of harm done in the name of religion, or lack of religion. Examples of this are as close as the shameful recent accounts of abuse by members of the clergy, or the article in Maclean's this summer highlighting Statistics Canada research about Canadians' charitable habits. That item called for more religion in mainstream life, and concluded that there is a "mammoth gap between those who believe and those who do not."

And then there are the "killing records." The violence between Muslim and Christians in the Crusades, the Spanish Inquisition, and the burning of witches totalled over 264,000 people killed, according to researcher R.J. Rummel. Prof. Rummel, a winner of the lifetime achievement award from the American Political Science Association for his work in peace advocacy, estimates that 110,000,000 deaths were caused by atheistic regimes in Asia and the USSR during the past 100 years.

"What is it about communism that permitted them to abandon restraint and kill their people? Atheism, active atheism was required," said Kirk Durston of the New Scholars Society. "If there is no God, it's hard to argue there is objective principle and governments make their own theories."

No wonder the experience of religious debate is such a hot topic - it's the continued search for what could be true for all people, in all places, for all time. For on this point, at least, Mr. Blair and Mr. Hitchens will agree: What you believe to be true matters. In fact, it makes all the difference in the world. 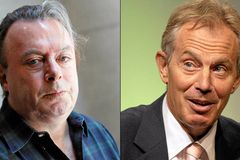