This is the con argument in the first of two mini-debates The Globe is hosting in advance of Friday's Munk Debates on China's role in the 21st century. The topic: Should Canada's oil sands fuel China? Click here for the pro argument.

The possibility of exporting bitumen from Alberta to China is invoked to put pressure on the United States, which recently postponed approval of the Keystone XL pipeline to the Gulf of Mexico and is moving, slowly but inexorably, toward an import ban on carbon-intensive oil.

A year ago this month, 50 members of Congress wrote Secretary of State Hillary Clinton, warning that "building this pipeline has the potential to undermine America's clean energy future and international leadership on climate change."

Producing oil from the Alberta tar sands generates significantly higher emissions than conventional sources of oil. These emissions constitute costs that are offloaded onto the rest of society - and future generations - through increasingly frequent extreme weather events, sea-level rise, ocean acidification and so forth. We're already witnessing the early signs of climate change: from the floods in Quebec and Manitoba, to the wild fires in Alberta and Arizona, to the rash of unseasonably early tornados across the United States.

Insurance companies know the score. Richard Ward, CEO of Lloyd's of London, warned last month that premiums will have to rise significantly because of the increasing frequency of weather-related disasters. Yet, the Canadian government provides $1.4-billion annually in subsidies to the tar sands. Alberta provides billions of dollars more support by charging some of the lowest royalty rates anywhere. Exporting bitumen to China would exacerbate this environmental and fiscal folly.

The Pembina Institute estimates that a new pipeline to Canada's West Coast would lead to a 30-per-cent increase in tar sands output, which would raise emissions as much as putting 1.6 million more cars on the road.

The argument that China will just find other sources of oil misses the point. Taking subsidized Canadian bitumen out of the market would increase the world price for oil and speed the transition to alternative energy sources, including in China. It would also place Canada on the right side of history. Two centuries ago, when Britain banned the slave trade, some slave-trading countries went looking for other markets. Others took a hard look at themselves.

Michael Byers holds the Canada Research Chair in global politics and international law at the University of British Columbia.

Brian Lee Crowley is the managing director of the Macdonald-Laurier Institute in Ottawa.

Editor's Note: The Munk Debates are semi-annual events that feature prominent figures in their fields. The next debate, to be held June 17, asks whether the 21st century will belong to China. It features former U.S. Secretary of State Henry Kissinger alongside economist David Daokui Li, CNN host Fareed Zakaria and historian Niall Ferguson.

The Munk Debates are offering eight VIP tickets to see the China debate on June 17 at Toronto's Roy Thomson Hall. Go head-to-head against a friend and post the video on the Munk Debates online forum. The top two most-viewed entries win. Find more information and enter at www.munkdebates.com/head-to-head.

For more news, videos, interviews and biographies, follow The Globe and Mail 's coverage of the upcoming debate here. 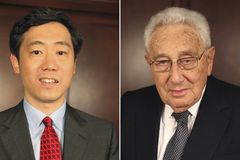