Random weekday morning. In this case, a Tuesday.

Even before coffee, I check my phone. There is terrible news: bombings in Brussels.

The list of recent bombings around the world is long and the death tolls dreadfully high. But when you have walked those streets (or taken that subway or flown out of that airport) – it hits in a different way. I think of a long-ago day trip I took to the city – its grand square, palatial art museum, the Manneken Pis.

The alerts are popping up on my phone. The number of dead and injured is rising.

I'm about to leave the house with a meatloaf sandwich packed in my bag for lunch when my husband emerges from the kitchen: "Rob Ford," he says. I understand immediately what he means.

We take a moment. One of us mentions that the federal budget is also coming down that afternoon.

"Busy news day," I say. (I can't help it; we're journalists.) I hug my seven-year-old extra-hard before leaving.

Pushing my way onto the packed, sweaty SkyTrain, I have a flash of fear. What would it take for someone to walk on here and blast our legs out from under us? I think about Donna Tartt's novel The Goldfinch, and the fictional bombing that takes place at the Metropolitan Museum of Art. What does it feel like to die among strangers; to not know what has hit you? If you're lucky, I think, it feels like nothing. It is instant and over.

I think about those people in Brussels, heading for a vacation or travelling home from a business trip – or on their way to work like me. Maybe carrying a sandwich made for them by their spouse. Or a little souvenir to bring home to their seven-year-old. People fuelled by hopes and ambitions; or pushing through jet-lagged exhaustion and a can't-wait desire to sleep in their own bed; or perhaps just going through a mental to-do list for the day. Maybe their hearts were already heavy with some personal troubles – perhaps there was loneliness or despair in their life. But it was life, right?

The same photo keeps popping up: two women on chairs; one on the phone, her hand bloodied; the other covered in debris and blood – but something has happened to her shirt, and she is wearing only a cropped yellow jacket with a bra underneath – clearly visible, along with her flesh. I recognize that this personal exposure is inconsequential relative to what she has survived, but I'm not comfortable with that photo. I think: invasion.

On Twitter, people are praying for and standing with Brussels. Demi Lovato, Caitlyn Jenner, a bunch of the Kardashians.

Talk-show host Jimmy Kimmel, who got many laughs at Mr. Ford's expense, sends his condolences to the former Toronto mayor's family and "fans." He calls Mr. Ford "an unforgettable guy who loved his job and city like few men I've met."

I think: Can we not, as we grasp for ways to be sensitive and polite about Mr. Ford's death, pretend that he loved Toronto more than other mayors have loved their respective cities?

I recognize that this is a death, too early, of a father, husband, son, brother, friend – that people are grieving, that he was only 46. This is sad, tragic.

But I also feel uncomfortable with the tiptoeing around the truth and the revisionist characterizations of Mr. Ford: a good guy, well-intentioned, scrappy in the best of ways, derailed by a substance-abuse problem. Even before his death, I read something this week suggesting we should feel bad about how we treated Mr. Ford: We didn't sympathize, we "other-ized" him; we wanted him to lose his job. Sorry, but Mr. Ford was the perfect illustration of why politicians demand scrutiny – to expose lies, poor leadership and terrible behaviour. It is preposterous that he had that job.

I think of Mr. Ford's populist parallels with Donald Trump – men of privilege manipulating their way into the embrace of the masses by cloaking themselves in everyman rhetoric and dumbing down the public discourse.

Mr. Trump is making news as well that morning; by the time I get to the office, he's all over the place, reacting to the bombings. On that Tuesday he insults Brussels ("a disaster city"), says he would be "fine" with using waterboarding (and "a lot more") as an interrogation technique and repeats his call to toughen up U.S. borders. He also calls for increased surveillance of mosques in the United States. "These attacks … they're not done by Swedish people, that I can tell you."

His Republican rival Ted Cruz calls for empowering law enforcement "to patrol and secure Muslim neighbourhoods before they become radicalized."

I worry about the elevation of this sort of politician. What would a President Trump or Cruz do to inflame a volatile international situation?

I think about the absolute randomness of tragedy. One minute you're travelling on business, or taking a bucket-list vacation, or heading to the office. And the next, it's over. One minute you're mayor of Toronto, untouchable and inexplicably loved, running for another term, and the next, you're out of the race with a rare form of cancer.

Life turns – or ends – on a dime. On the grossly twisted ambitions of fanatics. Or the yet to be fully understood twists of genetics.

Later on that random Tuesday, as scheduled, the budget comes down.

It occurs to me: I need to do my taxes. 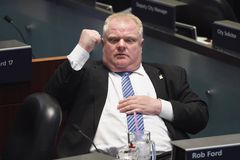 The real lessons of Rob Ford and Donald Trump
March 25, 2016 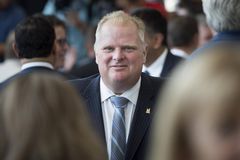