The feminisphere was abuzz on the weekend. Rapper Jay-Z had ordered lunch for Zadie Smith during an interview for The New York Times Men's Fashion Magazine. Imposed subservience, critics railed: Ms. Smith should have chosen her own meal, rather than have it chosen for her. Imagine what Eminem or Chris Brown would have done.

A bona fide example of female subservience was on full display elsewhere in The New York Times, in a news article about premarital counselling classes offered by Egypt's ruling Muslim Brotherhood.

The participants are told – by a male botany professor – that women are erratic and emotional and can't "take a decision and handle the consequences." (Only men have this ability.) What's a woman to do? According to the professor, "a woman takes pleasure in being a follower and finds ease in obeying a husband who loves her."

Her irrational nature, the professor says, disqualifies her from assuming leadership. Rather, subservience best suits her, as does motherhood. In the spirit of subservience, not a single participant (male or female) raised any objection to these teachings. After all, what better way to raise a confident, courageous generation than at the feet of meek, irrational mothers?

Such views are not new. One can find a plethora of material on "women in Islam," from the Middle East to South Asia, stating as much – if not worse. (For example, that a man should beat a recalcitrant wife.) Secular arguments against such misogyny carry little weight with those who give primacy to religiously based discourse.

Yet, these views must be challenged by Muslims, based on Islam and Islamic history. Female subservience as an essential Muslim characteristic is a myth. For one, Mohammed worked for a woman (Khadija) for 10 years, after which she proposed to him. During and after his tenure as a prophet, there was no prohibition of either practice.

Authentic traditions reveal that his wives would often question him. During the 23-year period of Koranic revelation, Umm Salamah once asked why, it seemed, that verses revealed (up to that point) were primarily for men. "What's in it for us?" she asked. This precipitated the revelation of a Koranic verse about gender equality before God.

The first step is to ask questions about religion without fear of reprisal. Muslims need only look to the Koran, which documents many questions and points to the Prophet Abraham, who questioned so that his "heart may be at peace."

Next, Muslims must make an effort to educate themselves about their own history – especially with regards to women, who were scholars, artists, writers, entrepreneurs, philanthropists, warriors and mothers. For example, a woman (Umm Sulaim), several months pregnant, fought alongside the Prophet during a battle. Another woman publicly challenged a proclamation of Omar, the second Caliph. His public response: "The woman is right and Omar is wrong."

Most important, no one can make proclamations about the "essential" nature of God's creation. In feeble attempts to justify the "irrationality, thy name is woman" paradigm, Muslim "scholars" have freely borrowed from Victorian teachings and spurious Western "scientific" studies. This bias must be challenged head on.

There also must be a deeper exploration of supposed prophetic narrations that demean women, in order to ascertain authenticity and context. Those who advocate female subservience under the cloak of religion must be asked: When was this unequivocally sanctioned during the life of the Prophet?

In Egypt and across much of the Arab world, populations have rejected decades of subservience to autocrats. They have sacrificed for personal dignity, freedom and the right to exercise choice. The Brotherhood's program aims to re-establish subservience within society, beginning with women. This contrasts Egyptian President Mohamed Morsi's pledge to appoint a female vice-president. It also sends a dangerous message about the government's priorities in a country where 80 per cent of women report some form of sexual harassment.

The BBC recently reported that Egyptian women are increasingly fearful for their public safety, and that young Egyptian men sexually harass women under the pretext that they are "asking" for it (even wearing the niqab). Rather than hectoring women to serve and cover up, the Brotherhood needs to tell men: Stop blaming women, take responsibility for your actions, and respect all women as human beings – they weren't created to serve you.

Jay-Z picks what his date will have for dinner. Sexist or high-rolling?
September 6, 2012
Opinion
In search of military-civilian balance in Egypt
August 15, 2012 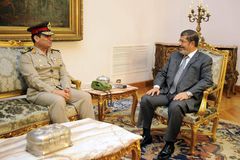 Egypt’s Morsi goes from not enough power to too much of it
August 13, 2012 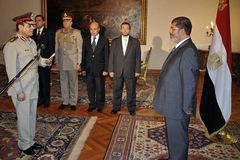