The NDP once picked stalwarts to fight the good fight as leader. Now, they have chosen someone who might disrupt Canadian politics. Don't underestimate the potential for Jagmeet Singh to shake things up.

The man making a victory speech in a bright pink turban had easily swept aside three sitting MPs with an outsider's campaign that turned to juggernaut, making the stalwarts seem pale in the process. Mr. Singh, widely called Jimmy, had hipster suits, good French, a viral video in which he dealt with a heckler, and a ground game.

He is the first visible-minority leader of a major federal political party, a palpable milestone in a diverse country. In his first speech as leader, he talked about growing up with "brown skin, long hair and a funny name," and being stopped by police for no reason, promising that as prime minister, he'll ensure no one is stopped "because of the way they look or the colour of their skin."

There will be some temptation to dismiss Mr. Singh as a Sikh-NDP Justin Trudeau, because there really are points of comparison. There's the cool, image-conscious politicking, the vague leadership-campaign policies and the hopeful speeches and slogans: Mr. Singh's "love and courage" rings in the ear like Mr. Trudeau's "hope and hard work."

At 38, Mr. Singh is seven years younger than Mr. Trudeau, and promising to bring young people into politics just as the Liberal Leader did two years ago. It's easy to imagine Mr. Singh talking about the things Mr. Trudeau promised and didn't deliver, such as dramatic improvements for Indigenous people or electoral reform, to make the claim that he's the real generational change and Mr. Trudeau is, well, outdated.

The phrases that Mr. Trudeau favours about diversity being Canada's strength have an echo in Mr. Singh's speeches, but the NDP Leader can speak from experience about being carded because of his brown skin. In a country where one in five identify as visible minorities, many voters will identify with the message. Mr. Singh, when asked whether Canadians are ready for a Sikh party leader, has answered that they need it. If it wasn't already taken, he might have added, "because it's 2017."

Mr. Singh has the potential to disrupt the patterns of Canadian politics. His candidacy offered the NDP a ray of hope that they could move beyond union workers and urban lefties to appeal to new Canadians and fight for suburban ridings such as those in the Greater Toronto Area. The stalwarts didn't.

In fact, Mr. Singh's three MP opponents were surprisingly weak. None mustered much of an organization. None made New Democrats dream. Charlie Angus's everyman message might have appealed once, but since Jack Layton brought them to a second-place finish in 2011, they wanted something bigger.

That's not to say Mr. Singh is a sure winner – he isn't. He just offered so much more potential to change things. The NDP needs to change a lot of things to win.

Meanwhile, the party is dwindling into irrelevance in Quebec, which was supposed to be the new NDP base. Even a New Democratic MP, Pierre Nantel, questioned whether Quebeckers will accept a turbaned Sikh as a party leader. But Mr. Singh will be new and different, and speaks French well enough: On Sunday, he said he learned the language out of solidarity with people who had suffered the slights of a linguistic minority.

Part of the NDP's playbook now seems obvious. They want to take back the mantle of being the country's progressive party. They'll accuse the Liberals of promising hope, and breaking the promise – on issues such as electoral reform or climate change or helping the ordinary joe economically. They'll suggest Mr. Trudeau's sunny ways have turned to cynicism. Mr. Singh will promise new hope.

The campaign to become PM that Mr. Singh announced immediately on Sunday is still a very long shot. But Mr. Trudeau's Liberals will worry that the NDP could hurt them by competing for "progressive" voters in new ways. We still don't know how much Mr. Singh, an Ontario MPP who went so quickly from insurgent to juggernaut front-runner in the NDP race, can surprise us. But the NDP voted for someone who might. 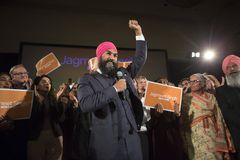 ‘I won’t lose’: Jagmeet Singh's swagger is like nothing the NDP has seen before Subscriber content
September 22, 2017 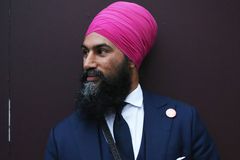